If you are looking for a very nice looking, comfortable hotel in Copan Ruinas, have a look at Hotel Camino Maya right on the town square. I discovered this hotel as I walked past it and just had to stop and admire the stained glass window that graces its lobby and, happily, passers-by on the street.

I didn’t get to stay at Don Moises Guest House in Copan Ruines because I didn’t know about it, and I did like my hotel, but from what I saw and heard I recommend it. I actually discovered it because I bought my ticket for my micro-bus to Antigua from the very nice owner and his son. The next day I met some guests. I was impressed enough to take a few photos, which I will post when I have bandwidth. (If you are traveling in the area, you definitely want to see these ruins — with the best guide, 75 year old Antonio.)

I had planned to spend at least my first night in Copan Ruinas at a hostel as I was traveling into the town alone. However, I met a British doctor who was sight-seeing before a volunteer stint so we decided to share a room. Even though I had this roommate, I asked our tuk-tuk driver to first let us see the hostel that had been recommended. It was nice, but the people there didn’t excite me, nor did the prospect of another top bunk, so we moved on to see the hotel our driver was recommending. I stayed at the Hotel MarJenny, a family-owned and run hotel with much promise on a nice street just two nice blocks from the town center. My hotel (on the left) when walking from the town square: 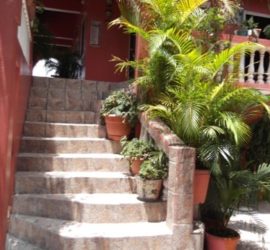 Are you are traveling to one of the Bay Islands (Roatan or  Utila) by ferry and need to spend a night in La Ceiba?  Backpackers tend to stay a night at the Banana Republic Hostel. It is right by a good part of town and a great dentist! — and is safe, but it definitely third-world backpacking. Forget the kitchen. The pots lacked handles. There weren’t 4 forks or spoons or knives. Knives were broken, the kitchen was filthy. Don’t count on water for your complete shower or an odor-free bathroom. And the bus out of La Ceiba info that the staff gave each of us was very wrong and problematic. A private room for 2 or 3 runs 450 Limpira, US$25 at this time, which you can split 3 ways. The dorm there runs 150 Limpira as well. (The dorms have backpack-sized huge, amazing lockers though, with electricity for charging!) From […]

If you are a solo or budget traveler wanting to stay in West End Roatan you don’t have to foot the bill for a $70/night hotel room or cabin by yourself. I missed finding this place online because I searched for “hostel,” but found it by walking around and asking others. I liked where I stayed in Sandy Bay, enjoying the owner and that it was right by an fantastic medical clinic. But you might want to stay closer to the more touristy area where the scuba classes happen and there are tourist-oriented restaurants and swimming. So this is the place: Georphi’s Tropical Hideaway Roatán, Islas De La Bahia, Honduras 504-2445-4104 or 504-2445-4205 $10/night for a bed in a 6 bed (3 bunks) room that has its own bathroom. She provides sheets and even has soap and shampoo packets. I didn’t get to stay there but she gave me keys […]

I am told you can find some guest houses that have dorms around the West End where the dive shops are, but that they don’t have websites. I didn’t find anything about one online. I did see a sign for a hostel when I went to the West End while on the sailboat but I didn’t see any place that looked like it was the hostel. Looking online, I found a listing with reviews and a website for Roatan Backpacker’s Hostel and decided to go there. The reviews said Mel, the owner, was very nice and helpful. This is true. She gave me plenty of information about this area — how to walk down to the beach, where to eat — and also answered every question I had for my articles about Roatan. It is a small two story building on a dirt road. It is easy to walk from […]