I had planned to spend at least my first night in Copan Ruinas at a hostel as I was traveling into the town alone. However, I met a British doctor who was sight-seeing before a volunteer stint so we decided to share a room. Even though I had this roommate, I asked our tuk-tuk driver to first let us see the hostel that had been recommended. It was nice, but the people there didn’t excite me, nor did the prospect of another top bunk, so we moved on to see the hotel our driver was recommending.

I stayed at the Hotel MarJenny, a family-owned and run hotel with much promise on a nice street just two nice blocks from the town center.

My hotel (on the left) when walking from the town square: 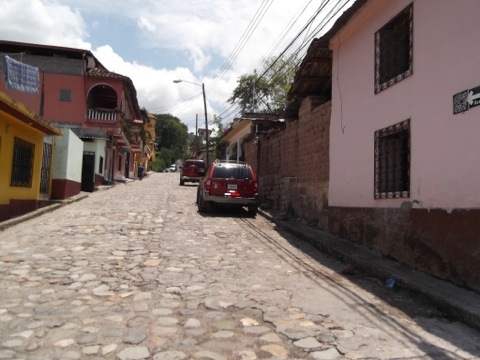 The MarJenny has a truly beautiful outdoor area. 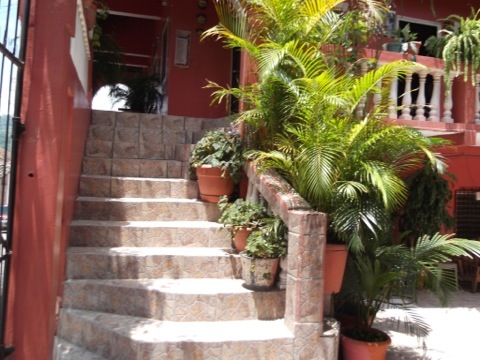 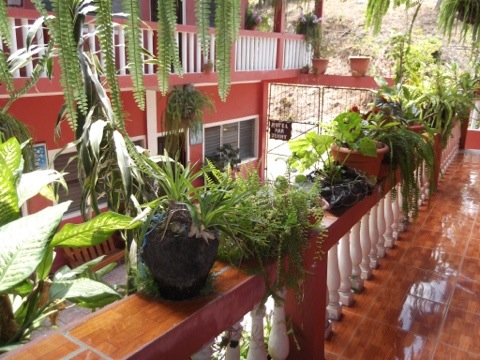 There was no accommodation to sit and enjoy it, but they were in the act of building a nice looking pool while I was there, so I expect this to change shortly.

My room was not fancy, but it felt clean.

Bathrooms are a huge thing when you travel in Central America. You come to greatly appreciate a porcelain toilet that actually flushes, a tiled bathroom, and a tiled shower that has hot water and doesn’t appear to be about to electrocute you. This bathroom wasn’t fancy, but it met all those desires for me. (My roommate didn’t fare well with hot showers as she was up and showering before 7 and for some reason, they kept turning off the hot water until around 8. In fact, no hot water meant no water. On the second day, I actually found myself at my front door yelling down for water, and hot water but they moved fast and it was on within moments. I did enjoy a great hot shower each morning, once there was water. )

We did not opt for a room with air conditioning as due to Mosquitos, it is best to have a fan trained on you and that is cold enough.

The room I was in, shot from the outside hallway: 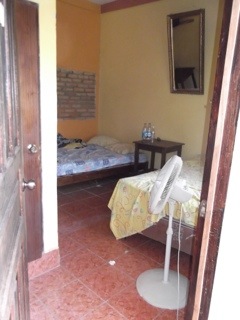 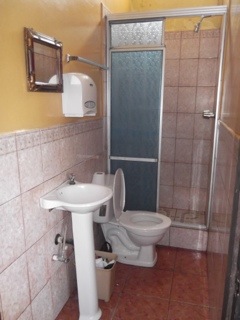 There was one huge downside to staying there though, showers aside. On the second night, a horribly noisy bunch of private school students arrived at 1am and their teachers had zero inclination to teach them decency. They were more than noisy, until at least 3am. They were no better the next night. My friend and I felt the hotel should have done something, but the hotel said there was nothing they could do. I wish we had been made to understand that the school was to have every room but ours and that all the other tourists had gone. I hesitate to recommend this hotel because of this, just in case there is another school there the night you stay there on my recommendation. That said though, the class of my own teenage niece was not permitted to return to a CA hotel a second year after being too noisy on their first stay. Teenagers are universal.

I do know that drivers get a commission for bringing us to a hotel, but he said this was his family and anyway if the hotel was happy to have us, we were fine with that arrangement. We didn’t take the driver up on having him as our tourism although I took his number on that first day. Learning prices we found his high.