“Bucket list” — a list of the things we want to do before we kick the bucket.
I never made one, but one day I got to thinking about the things I’ve already done in my life.
(Things outside of the scope of family, formal education, and career.)

Some of these may have been on my bucket list had I ever made one.
Others were simply interesting opportunities that have presented themselves during the adventures of my life so far, mostly during my various travels.

Frankly, I was amazed at all that I have here, and I keep thinking of more.

What would you do if you had unlimited time, money and resources?
What have you already done?
I bet you’ve done something that’s on someone else’s bucket list!

So, just because I’d made my list, here’s what’s on my Already-In-My-Bucket-List…
(In case you’re wondering, there’s plenty more for my Yet-To-Do-Bucket-List.) 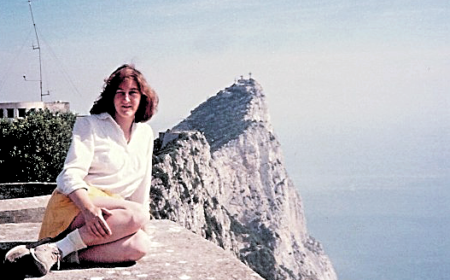 Deb on the Rock of Gibraltar

I’ve held a piece of the rock, sitting upon the Rock of Gibraltar

I have climbed upon an Egyptian pyramid at Giza

I have visited the Sphinx at Giza

I have stood inside the Colosseum in Rome (and many others)

I’ve walked upon the Scala de Tuchi, the Stairs of the Turks, Sicily

I was taken in by Thomas Jefferson’s inventions at Monte Cello, his home in Virginia

I marveled at the inventions of Leonardo da Vinci in Clos Lucé, his one-time home in Amboise, France

I admired da Vinci’s inventions at Neuschwanstein Castle (the model for the Disney Castle) in Bavaria, Germany 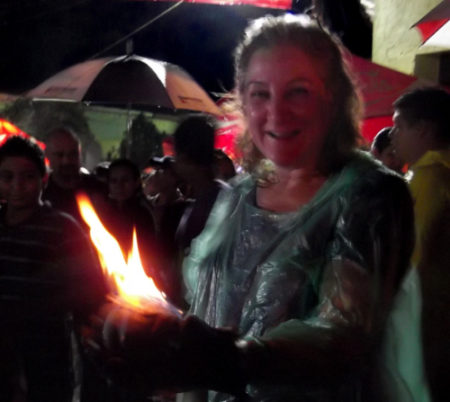 I held a ball of fire at the Las Balos de Fuego (Balls of Fire) festival in Nejapa, El Salvador

I rode the Staten Island ferry to take in the view of the Statue of Liberty, NYC so many times because she never gets old to me

I have been to and inside of the Statue of Liberty, NYC

I have been to the model Statue of Liberty in Paris

I have seen the Statue of Liberty in Las Vegas

I’ve walked and bicycled across the Brooklyn Bridge — many times

I saw the Terracotta Warriors and city in Xian, China, just 13 years after their discovery by 9 farmers.

I have walked a good distance on the Great Wall of China arriving not by tour, but on a bus that my friend and I rented so we could see what we wanted in the greater area and stay longer than tours allowed. 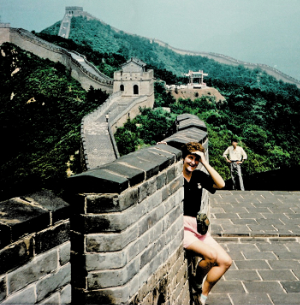 Deb on the Great Wall of China

I have walked the second longest wall in the world as well (in Ston, Croatia)

I’ve walked on the city walls of Sienna, Italy, the inspiration for the Crayola Crayon color

I’ve walked on the city walls of Conwy Wales, Caernarfon Wales, as well as Chester, England.

I’ve walked Wall Drug too, and even wrote words for a sign; they paid me $2 or so.

I have jumped the NYC Subway turnstile (legally)

I have been part of the New Year’s Eve celebration in Hobart, Tasmania
(After helping welcome yachts in the annual Sidney-Hobart Yacht Race)

I have bicycled half of Germany

I have bicycled from London to Brighton, England in the London – Brighton bike ride

I have bicycled across Holland

I have bicycled across Denmark

I drove the Berlin Corridor through East Germany to West Berlin.

I went through Checkpoint Charlie into East Berlin, shopped there and saw an opera there.

I have prayed at the Western Wall in Jerusalem, Israel

I have climbed Masada, Israel and watched the sunrise from the top

I learned to windsurf on the Sea of Galilee, Israel

I windsurfed in Eilat, Israel

I have windsurfed (badly) in Oslo, Norway 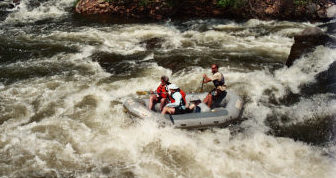 I have rafted white water rapids down the Kern River, CA

I have white water rafted in Costa Rica

I have canoed on the Delaware River, New Jersey

I have sailed off City Island in NYC 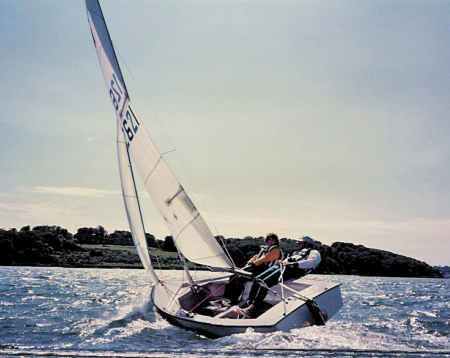 Deb sailing in the Isle of Wight

I have sailed at the Isle of Wight, UK

I have sailed from Tasmania to Victoria, Australia

I have sailed out of San Diego, California

I’ve boated amongst the caves and grottoes in the Algarve, Portugal.

I have flown as a guest of a balloonist in a hot air balloon in Albuquerque, New Mexico 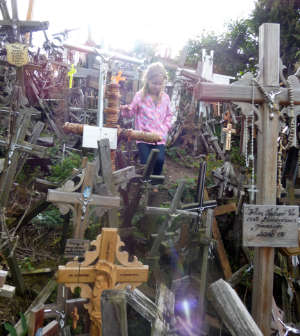 Hill of the Crosses

I have walked through the Hill of the Crosses in Lithuania

I have seen the Loch Ness Monster (statue) in Loch Ness

I have kissed the Blarney Stone in Cork, Ireland

I have walked on the pillars of the Giant’s Causeway in Northern Ireland.

I had real Guinness beer in Ireland

I have downed beers at Munich’s Octoberfest, twice, decades apart

I’ve done wine tastings in maybe every major wine region of the world. 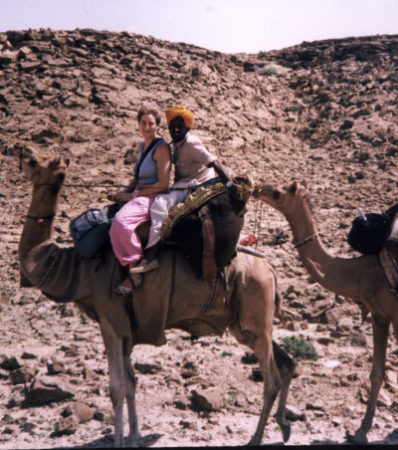 I actually rode a camel in NYC (before I was 4)

I have ridden on an elephant in India

I have been in the Taj Mahal

I have waded in the river beside the Taj Mahal

I’ve viewed the serpent during the spring equinox at Chichen Itza in the Yucatán, Mexico 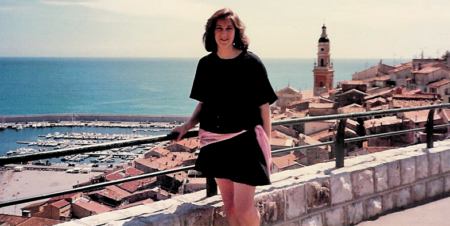 Deb in France, walking to Monaco

I’ve been to Disney World

I’ve been to Disneyland

I’ve been to Universal Studios

I came over and rode the coaster at Palisades Amusement Park, after dark

I’ve biked to, then ridden the rides at, Tivoli Gardens amusement park in Copenhagen, Denmark

I’ve prospected for gold at the original Legoland in Denmark 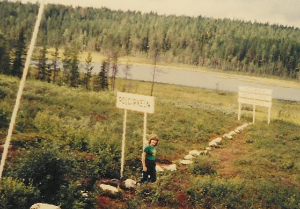 Walking on the Arctic Circle

I have walked on the Arctic Circle

I have camped under the midnight sun in Narvik, Norway

I have danced inside a Hindu Temple in India

I have walked from Europe to Asia in Istanbul

I have hiked the Pennine Way across the UK 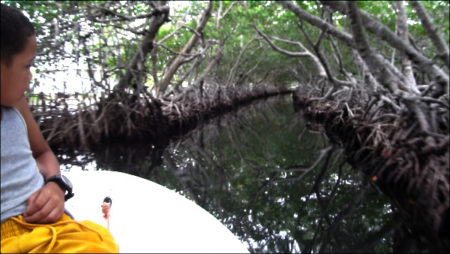 I have swum in several Cenotes in the Yucatan, Mexico

I have snorkeled on the Aqaba Coast,  Siani, the 2nd best in the world — after being prodded awake by a camel outside of my Bedouin tent

I have snorkeled the Great Barrier Reef (as sharks swam nearby)

I have snorkeled in Eilat, Israel with both Egypt and Jordan in view 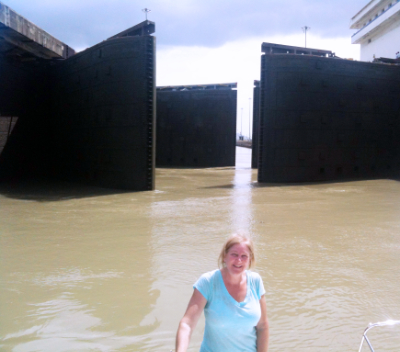 In the Panama Canal

I have snorkeled in Coiba, Panama and quietly glided over a low-swimming Stingray

I have transited the Panama Canal — 3 times, first as catamaran crew and then on tugs

I’ve kayaked the pristine waters of the Channel Islands, California

I have kayaked the coast of Marina del Rey and Santa Monica, CA

I have kayaked (and tried stand-up paddling) in Malibu, California

I have kayaked out of Mango Creek Lodge, Roatan, Honduras and snorkeled there

I have kayaked out of Santa Catalina, Panama

I have kayaked to forts in Portobelo, Panama 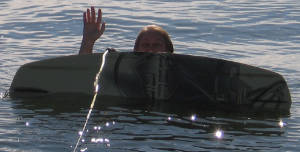 I have day-cruised cruised on the Danube at Copenhagen 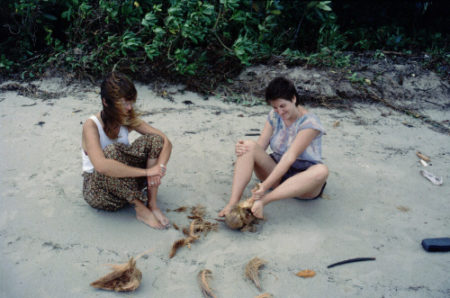 I’ve slept in a house in Portsmouth, England that was built by Henry VIII for Anne Boleyn, his ill-fated second wife.

I have slept aboard the Queen Mary

I have been to Meteora, Greece — but it wasn’t for my eyes only as it was for James Bond

I’ve walked to the Acropolis in Athens, Greece 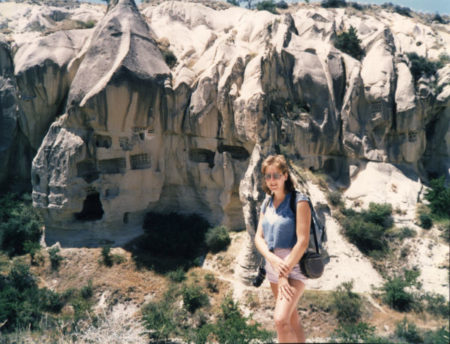 I have traveled by private boat from the island of Kos in Greece to Bodrum, Turkey

I’ve stood at the foot of the fairy chimneys in Goreme, Cappadocia, Turkey

I have climbed up, seen and learned about Nemrut Dağı, Mount Nemrut, an ancient mystery in Turkey

I’ve crawled through abandoned rooms and hallways in Derinkuyu, the underground city in Cappadocia, Turkey.

I’ve relaxed in the hot waters of Pamukkale in Turkey

I have been to Pompei, Italy — twice, 30 years apart 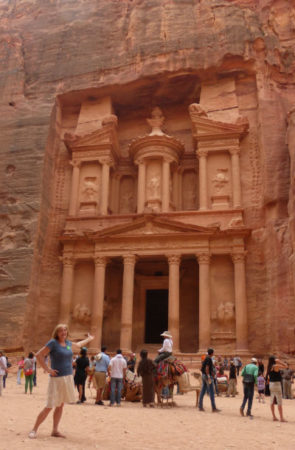 I have been to Al Khazneh, the Treasury, at Petra

I’ve sat in the Ancient Theatre of Taormina (Teatro antico di Taormina), built by the Greeks in Taormina, Sicily

I’ve learned history at the Alhambra in Granada, Spain

I’ve been spelunking in the caves of Tasmania, Australia

I’ve been to the races at Del Mar

I have been to glaciers in Alaska

I’ve been to the Grand Canyon — twice

I’ve been awed by Sequoia Trees in California

I’ve wondered at the sight of Death Valley, California

I’ve driven Californian’s Highway one from San Francisco to LA and from Mexico to LA.

This is what travel is to me.

I have slowly driven across the USA – twice, and have been to all but 5 or 6 states

I’ve visited many a US National Park

I have been to every county in North America

I have been to every county in Central America, staying in most for months each

I have spent time in every county in Europe, enjoying substantial time in most

I have been to 6 of the 7 continents, not just for a few hours or a few days
(I haven’t been to Antarctica yet.)

I’ve been to 5 of the 7 New Wonders of the World and most of the other 21 nominees. I’ve seen marvelous inventions. I’ve learned and been confused by world history and world politics, hearing local accounts wherever I’ve been. I’ve been to so many more historic sites than I can list here.

I’ve gotten to know people from perhaps every country on our amazing planet.

What is travel to you?
What’s on your own Travel Bucket List?