Me, the TV Engineer

Once upon a time I was a successful young professional living and working in NYC. I absolutely loved my life and all of the perks of being in the media in NYC. But the world beckoned loudly, and even more so as I traveled Israel and then coming out of Egypt and upon my return to my homeland of NYC. So I left and traveled — for three years.

I independently traveled the world solo starting in the mid-80s when each traveler’s notebook of people we met was our own couch surfing site. Although it was possible to mail a hostel payment and reservation, I never reserved ahead of time as that killed spontaneity.

And then I came back to the USA and the home computer revolution. I bought a DOS laptop. It had two floppy drives to alleviate disk swapping. I taught myself DOS, WordStar and some other software.

Soon I was selling computers. It was as I was selling DOS computers that a Microsoft salesman came in and showed me early Windows. He was so excited that Windows made this PC work just like that tiny computer in the corner that when he left and the Windows software didn’t work so well, I looked a lot harder at that tiny computer in the corner. The one called Macintosh. 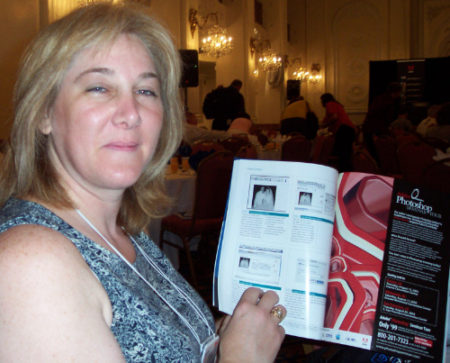 This was taken at Macworld Expo as I showed someone a photo I’d used in one of my Adobe GoLive columns in MacDesign.

Soon I was selling Mac, teaching Mac, on the Board of Directors of the Macintosh user group that held the largest meetings in the world, and was writing about the Mac for most of the major book, magazine, and web publishers.

I also taught and wrote about the internet (yes books were written on how to use it), the web (a subsection of the internet) and how to create websites. This is me, speaking via iChat

I frequently spoke about Macintosh to teach MacEfficiency™ (the name of my popular column at MacCentral and seminars at Macworld Expo) or other tips. I also spoke about web design.

I don’t recall the topic, or why I wasn’t there in person that time as I lived only about an hour away from this meeting location.

Looking back, it was as bit of foreshadowing, eh?

This is me, once upon a time in my former home office. Me in my former home office.

That shelf over the door isn’t my software collection; it’s just my Windows software. You may notice that it’s mostly Adobe and Microsoft.

The larger shelf was host to my Mac software. Well, some of it. There was a lot more…

That white shelf was home to some of the print forms of some of my own words. Atop the book shelves are a few banners from a couple of the Macintosh events I’d produced. It was an office full of tech stuff. Outside of that office…
this is part of the home I had before I left to travel — just so you don’t think I was some sort of odd bum. See, I was a normal person in a beautiful, albeit too white, apartment.

I still have the Chinese art, for sure! It was purchased by me on the side of a road in Beijing, China while the local Chinese artist was still painting one of them. I had no idea how I’d get these fragile looking pieces home in my backpack, but I managed to protect them well as my travels in Asia continued through several countries for several more months. It was framed in Los Angeles as a gift from my parents when I settled into LA. Now it’s well wrapped and safe.

The black iron stool, part of my family heritage, is safely stored for me too. So are the tiny family photos.

My dining room table & floors I had just put in.

Most of the furniture and the TV are long gone to other who are using it well, I hope. The cabinet faced with photos of my first world travels (3 years that time) is hopefully still safe as part of a friend’s home and will be mine again when I settle back in LA eventually. The MoHu TV antenna against the wall.

I still own the xBox and I hear a relative is enjoying it.

I certainly still own the MoHu TV antenna which fantastically provides TV without cable and is nearly invisible. Me in Vannaris, India with still- friend Gary B. Hudson, another world traveler.

Some of my three-year travel earlier in my life. As I said, the world beckoned when a similar opportunity presented itself. I called it an opportunity and had to explain that to my friends when they called it losses. Some called me crazy but everyone was excited for me and wanted to follow my travels.

This is me the second and third years of that three-year backpacking trip through Europe, India, Asia, and Australia. Maybe travel was always part of my soul. Me on the Great Wall of China, having arranged a private bus tour. Me in Goreme Turkey

And even before that…

Before the world, I saw most of the United States. This is an overnight camp-out en route from NY to CA, moving cross-country with my best friend Cathy. We drove my Torino and camped in my tent. If you have really good eyes you can see me standing near the entrance of the tent.