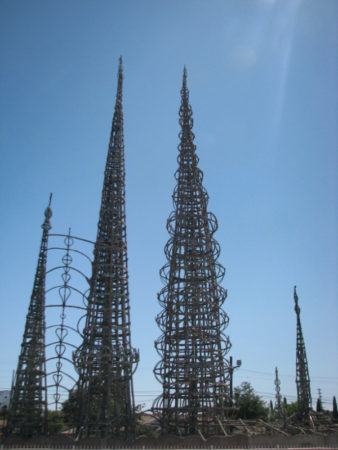 The Towers of Simon Rodia, aka The Watts Towers

One day a single Italian immigrant living south of downtown LA started using discarded pieces of steel, wire mesh, mortar, glass, and tiles and by hand, without any power tools, he created a set of structures that confounded his neighbors…. Today they stir imaginations.

When I first moved to LA and heard about the Watts Towers, I thought they were housing or office structures like the Empire State and Chrysler buildings.

As Watts had carried a stigma from an unfortunate situation that led to riots or rebellion in 1965, even decades later Watts was a place people were told not to go. I never had any business to do there, and only heard of Watts as a geographical reference, so it was well over a decade before I learned they were a sculpture.  Once I knew that and saw photos of them, their spires rising into the air much like Gaudi’s Basílica i Temple Expiatori de la Sagrada Família, I had to see them in person.

These days, over 40,000 people visit the Watts Towers of Simon Rodia State Historic Park each year! 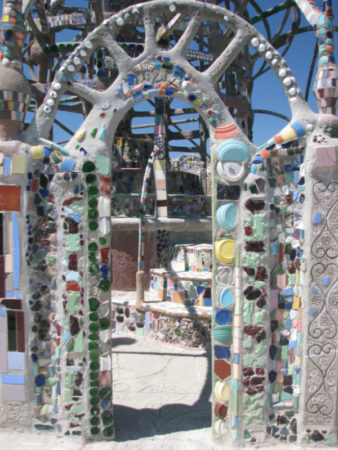 My cousin Lisa and I went to see this unique art in this real part of Los Angeles. We got in my car and headed slightly south of downtown. We made a day of it. The Watts Towers, lunch at the nearby Jordan’s Cafe which was recommended by a woman who worked at the towers, then the Neon Museum and Angel’s Flight downtown. It was a great day.

It has taken me 8 years to post my photos and tell you about the Watts Towers, but they are timeless sculptures and they only grow in fame, so this is still a travel experience worth telling.

Unfortunately, Jordan’s Cafe, which opened in 1942, closed in 2011, so you will miss out on discovering its authentic home-cooked, well-priced Soul Food.

About the Watts Towers

The Towers of Sabato “Simon” Rodia are actually called Nuestro Pueblo, Spanish for “Our Town” although Mr. Rodia actually came from Italy. (He was born in Italy on February 12, 1879, came to the USA at age 15, and died in California on July 17, 1965.)

As I’ve said, I’m reminded of the architecture of Antoni Gaudí, whose work in Barcelona is well known to the world. Like many others, I was impressed and somewhat amused by Gaudi’s buildings. I suspect Mr. Rodia was too. Like Gaudi, his structures are a mix of ceramic, stained glass, and wrought iron. Both take on unusual shapes.

Have a look at Gaudi’s Basílica i Temple Expiatori de la Sagrada Família, the first thing that popped into my mind when I saw a picture of the Towers of Simon Rodia. (I’d put a photo here, but mine are not digitized and I haven’t looked into the legality of using a photo of someone else.) 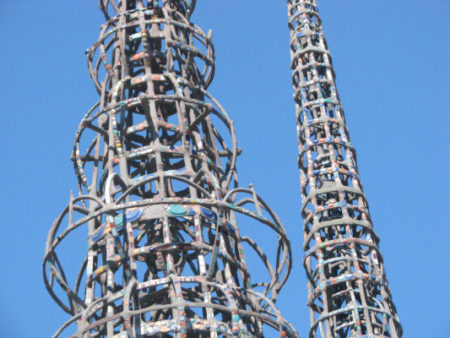 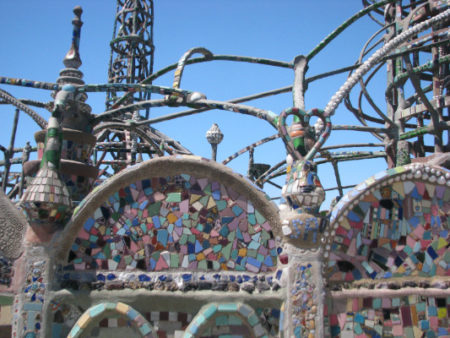 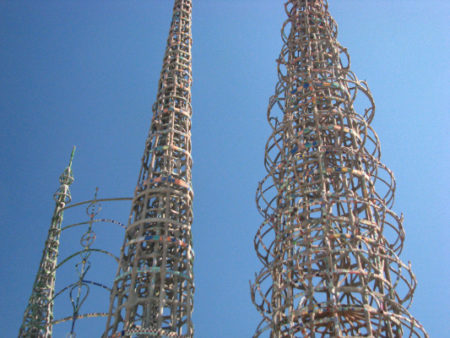 The popular story of the building of the Watts Towers (at Wikipedia) is that neighbors helped by bringing him bottles and ceramic tiles that he broke up to use.

However, while in the neighborhood dining at Jordan’s Cafe afterward, I met a man who has lived there all his life and he recalled, with great sadness, that from the train (or maybe it was a bus) window, he and his friends would see him working on his towers — and, considering him a crazy man, “as young stupid boys would do,” threw stones at him. Of course, now as a grown man, he regrets the deeply.

I can only hope that some of his neighbors were kinder to this artistic man. 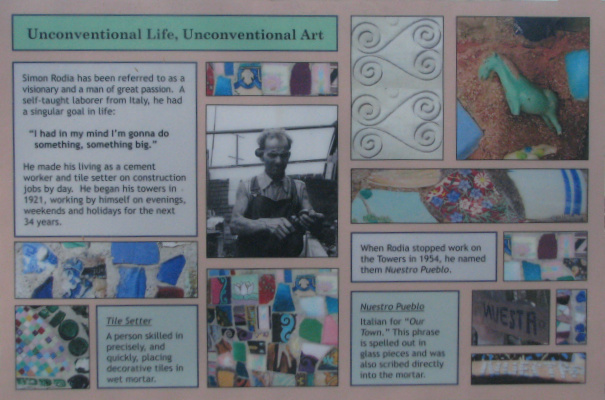 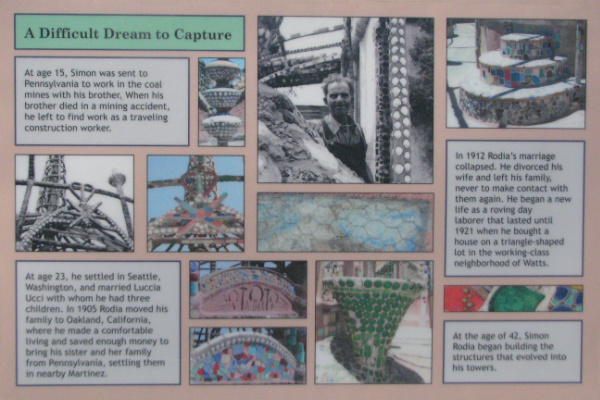 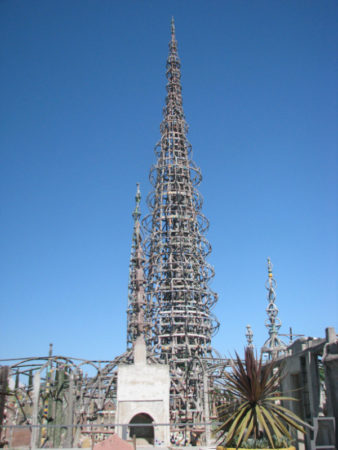 The towers truly are an amazing feat.
According to the official Watts Towers of Simon Rodia State Historic Park website:

The website goes on to say things such as:

When I learned of Simon Rodia’s labor and thought of how the people around him treated him badly, I felt sad for the man. I can’t imagine how he felt having neighborhood people taunting him. More happily, his work started to be known to the world before he passed away. I pray that he has been able to look down from wherever he is and know how well appreciated his solo feat was eventually received and continues to be received. 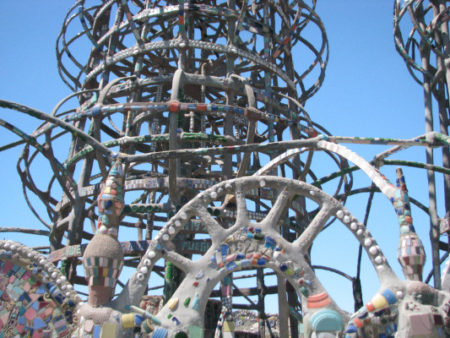 When I was there, there was a nice education center but I’m not clear as to whether that’s open at this time so I recommend visiting the official website and phoning.

There have been public tours of the property since 1960. As I write this, in 2018, the towers are newly under a 3-year restoration so you can’t take a tour inside. However, you can see plenty from outside the fence — and there are free guided tours on Thursday, Friday, Saturday, and Sunday. Or you can come any time on your own and view the towers from outside the fence. Any view of them is amazing.

My best tip:
Bring binoculars or a camera with a good zoom lens to really appreciate the tile work on each of these many structures!

There are actually many cultural activities going on at this State Park, both ongoing educational and special events. If you’re visiting LA, it’s worth checking out the website.

Getting to the Watts Towers

Note: When I was there, a local man told me not to wear red or blue and to stay out certain neighborhoods as I drove to and from. I was safe on the main streets, he said.

Going by car provides the most flexibility.

It’s also easy to get there by Metro if you have access to the metro. I recommend using a good maps app as you go so you’re certain not to get lost.

Websites don’t mention this but per Google Maps:

Of course, you can take a bus as well. Please check the metro maps or find directions on Google.

It may be wise to call the center to check into the general wisdom of taking any particular route.

Read more about the Watts Towers

Many articles have been written about the amazing work of Simon Rodia.

Here’s a good article about the Watts Towers, last updated in 2017: Watts Towers: The Story of an L.A. Icon

PBS did a 10-minute video program about him as well — LA Art, Watts Towers — and you can watch it online.