If you ever get out to Joshua Tree National Park in California, or otherwise visit the Yucca Valley, part of a designated a California Scenic Drive,  you might want to stop at a unique little old western village called Pioneertown and a walk down its small Mane Street. (Yes, Mane Street, not Main Street.) There’s no admission fee. Just come, park your car for free, and walk around.

If you are thinking “Pioneertown is a strange name for people to have named their town” in the 1880s when they settled out in this open desert area, you’d be correct. You see, it wasn’t pioneers who came and developed this town and it wasn’t the 1880s.

Pioneertown was actually created in 1946 as a living set for western movies, created by some well known western stars including Roy Rogers and Dale Evans. (I name them because they are the names I know best.) Imagine that as you were filming, you could actually live in the town where you were filming. I’m not certain that’s what they did but it’s what I envision they did, living on the streets off of Mane Street.

Did you know that today, the buildings and streets inside Warner Brother’s Studio or Sony Studios are used for location shots but actually house production offices?

You can read about that yourself in the photo I share below. It’s a photo of the plaque outside of the Post Office.

The plaque states that over 200 movies and TV serials were shot there. My advanced search by location at IMDB.com brings up 50 film titles that credit Pioneertown as a shooting location. Most of these were shot in the 1950s but some are as recent as this decade. Commonly cited is The Cisco Kid, a 157-episode program that started in 1950.

Today, Pioneertown is home to a historic hotel, an unlikely concert venue, and a bit of western history. Some of the facades are now gift or craft shops. From what I’ve read they were originally things such as ice cream parlors. If you’ve never seen a hitching post, a pioneer town style water pump or printing press or wagon, it’s interesting to look at these things.

One large facade sports an actual bowling alley (although not western style 10 Pins). However, it’s closed now and I was only able to peep inside through the paper that covers the windows. When it was last open, my friend told me, the bowling ball rode a bit of a roller coaster to arrive at the pins. Oh, how I wish they’d set up 10-pins there.

The US Post Office, located at the far end of Mane Street, is an actual US Post Office. From a look at Google Maps there may be more there than I was able to see as I strolled down Mane Street. 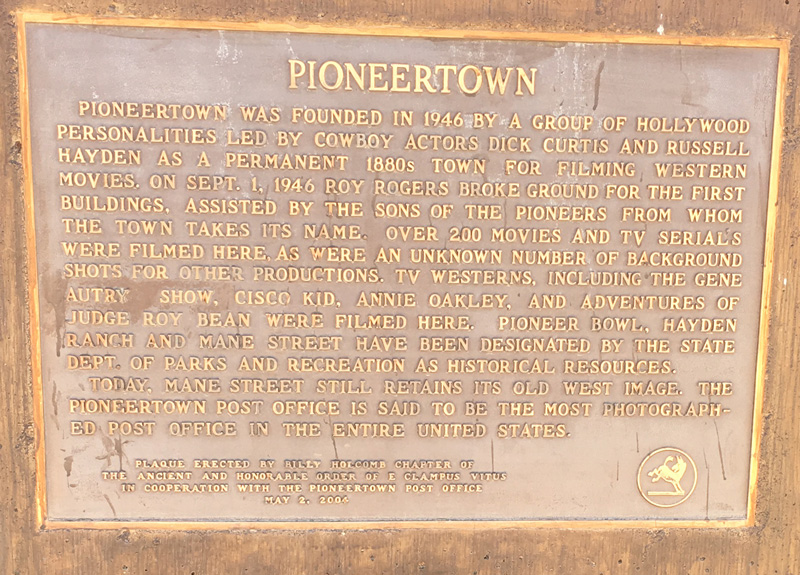 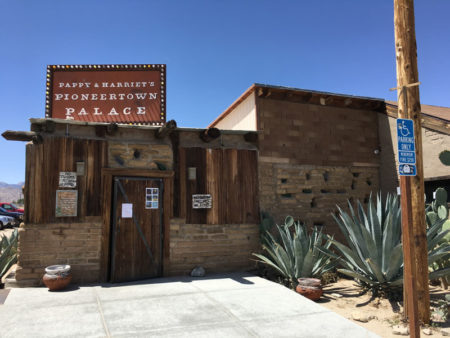 Originally just a facade — the “cantina” set of the town that was used in many a  western film from 1946 “well into the 1950s,” the cantina became a reality but as “an outlaw biker burrito bar.”

Ten years later, the location became what it is today, a restaurant, bar, and stage with a family atmosphere.

I was there on a 2018 Thursday afternoon and it was full of families and friends enjoying good eats. Unfortunately, the friends who brought me there weren’t hungry and didn’t permit me to treat them to one of the well-priced lunch sandwiches or burgers so I can’t tell you about the food from a first-hand experience.

This local favorite is also known as a great concert venue. In fact, you may know the name of one man who gave an impromptu performance for 300 lucky people there on October 13, 2016. His name is Paul McCartney.

Rather than show you a photo of the stage, I’ve embedded the video of that performance.

Who knows… maybe you’ll catch a great show while you’re there!

Note: my quotes come from PappyAndHarriets.com/history where you can read more.

By the way, if you’re not inclined to go to Joshua Tree to see, walk or climb through the amazing desert scenery and rocks, Pappy & Harriet’s is a 2-hour drive from Los Angeles.

Want to stay there?

There’s a Pioneertown Motel that dates back to the founding of Pioneertown. I didn’t get to check it out but I’m told that people often stay there after a concert. It’s also close to Joshua Tree so it can be your place to rest after a day in the desert and a nice dinner at Pappy & Harriet’s.