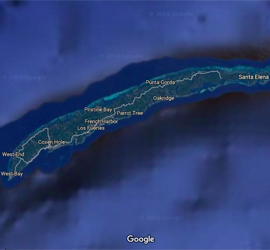 On the Bay Island of Roatan, there is only one main road which runs across its length.

At one point it crosses from running on the north shore at the west side to the south shore on the east side. From that main road, you will see offshoots that lead to the various towns and resorts. These tend to be marked with large signs.

You will not find signs marking street names; there are no street names or street addresses on Roatan. Instead, you need to know landmarks.

There are busses on Roatan, but they — and the bus stops — are not easy to spot. Tourists tend to take taxis. The busses are actually mini-vans. From what I have seen, they are white and rather unmarked. A bus will go all over, off the main road into the various neighborhoods, so it can take a couple of hours to get across the island. (Staying near Oakridge or Calabash Bight and wanting to go to the West End, I was told that taking the bus would be a great, inexpensive way to see the island: the neighborhoods, housing, people, streets, homes. It would require a bus into the main “city” of Coxen Hole, plus another bus, about L35 + L15.)

Legitimate taxis all clearly display their official taxi number on the side of the car. There are no meters in These taxi cabs; ask the price before you get in. A taxi will run either as a taxi or a Collectivo. You pay per person either way. The difference is that as a taxi — when you specify be beforehand and negotiate your price — the driver won’t pick up other passengers along the way. This trip costs more, of course. As a Collectivo, you may start the trip alone, but the taxi driver will watch for potential passengers all along your route and you will be sliding over on your seat to squeeze another person, a mother and child, and perhaps packages. Expect to be squeezed shoulder to shoulder with three adults in the back. (As I am tall and block the rear view mirror when in the middle, I had additional passengers get in at either door, rather than sliding to the middle.) A passenger will also be carried in the front passenger seat. Some taxis have seat belts, but people don’t tend to use them. Some taxis have air conditioning.

From the Mall near French Harbor to the West End, for myself, a thin 11-year-old and a small 8-year-old, I was asked for 200 Lempira by the first taxi, but during negotiation, the next taxi that pulled behind that one asked for L140 (US$7). I think the driver heard the three of us negotiating. This brought the asking price of the first taxi to 140. I took the second taxi and found the driver to be kind.

From the West End after dark (at 7:30 p.m.) to French Harbor (to be fair, to A “yacht club” called Brooksy Point, a ways past French Harbor, to where the Iguana Farm or Frenchy’s 44 are) I paid L300 (US$15) by pre-arrangement. That was for the same two children as well. I am told that was high but it might not have been. There were 5 other cabs waiting for passengers at the West End, but responsible for children after dark, I did not want to have to worry about negotiation and have any possibility of being stranded. On the other hand, I hated having a time limit on my excursion. Alone or with adults, I would have just found another taxi later. My driver said the drivers there would want US$25 for that ride. I may never know.

Between the bus stop in Oakridge and Eldon’s or the Mall in French harbor is L60 (Collectivo). From the Mall area to Oakridge I believe my friend paid L200 for the two of us to travel shared (Collectivo) but with priority.

Taxi from Coxen Hole to Sandy Bay should be L30 (Collectivo)