Travel is the longer-term. Within my travels, I take trips.

I can fly! Nope, no Peter Pan complex here. Simply joy at the press release today, June 28, 2017, from the US Office of Homeland Security: Secretary John F. Kelly Announces New Aviation Security Enhancements.  Finally, the debate seems to be over! No laptop ban if airports comply with new enhanced screening protocols.  So you can ignore this entire article, but I’m keeping it here because well, I bothered to write it and who knows… maybe it’s of interest to you.

I have long-known that I’d start my travels again after over a year back in LA with family, friends, and clients. I knew I’d leave over the summer or in early September. And I’d long known I wanted to revisit parts of Europe for the first time since the ’80s. But I was in no rush to make solid plans and purchase an airline ticket. I’m not an over planner and have been in all my travels since going base-less in 2011.

However, this time, for the first time, I was hesitant. I was nervous and unsure of my travels. Not because of my emotions,  belief in myself, or fear of what can happy along the road — but because of my government.

I’d selected Europe for my next travels. I haven’t been to Western Europe (UK to Scandinavia to Spain to Austria) since my very first travels many years ago so I thought it time to get back there. I also have friends to see for the first time in many years. But recently the good old easiest place to travel — Europe — has become impossible.

From March to the beginning of May, I wondered what would be involved in getting permission and papers to enter Europe, given the EU’s March announcement that the Visa Waiver would be rescinded. (See WSJ article.) Would it be easy? Or would the twists and turns of the newly-elected American government have consequences that were reflected back to American citizens traveling to Europe? That worry finally ended on May 2 when the EU announced a continuation of the Visa Waiver program. (Americans: you should know and appreciate how lucky you are that this exists.) 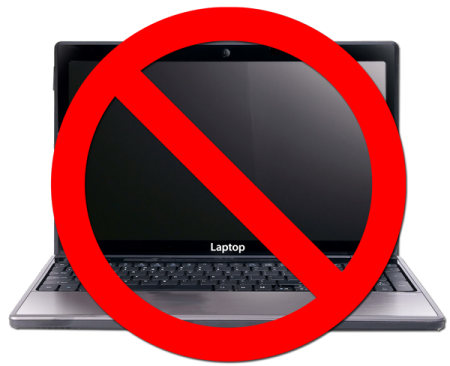 But then the talk of electronics being banned from the plane cabins for people flying from Europe and the USA started up. Apparently, electronic batteries have been turned into bombs. So now, although I’d like to be purchasing my flight to Europe now, would I be doing so at the potential cost of not being able to use my ticket without gambling that my computer will not be stolen or damaged on the flight? The Dept of Homeland Security website remained silent on this though and one expected announcement date, May 11, came and went.

So we had to wonder whether “Europe” meant the EU or the entire Schengen area and whether the UK and Ireland would be part of the ban. (It appeared to include the UK.)

First, it was to be only from Europe, so a long-term traveler such as myself could get out of the USA to Europe and the question of how to get home with a laptop (iPad, etc) was postponed.

And then what about all flights to and from everywhere?

What would be the backlash for business travelers? Business travels are the largest segment of fliers and likely are the ones who keep the airlines in the black.

This entire thing is not just frustrating. It’s also highly disruptive — not just to tourism, but to American business. I’m sure that plenty of European businesses can get along just fine without doing business in the USA.

I can understand not permitting us to power up any electronics during a flight. According to movies, for a long time, a simple phone can trigger a bomb. (And who wants to hear people’s phone conversations on a plane anyway.) But that’s not the issue.

They are suggesting electronics — all, not just laptops — be in our luggage,  in the cargo area of the plane. And that’s even worse per experts. A bomb or fire in the hold can blow out a plane’s walls and there is no one is down there to put the fire out. It seems to me that the safest place for our electronics is out in the open on our laps or in a small carry on that is on our lap. That way heat, smoke, and fire will be clearly evident and can be immediately acted up (until the next generation bombs).**

[October 20, 2017 — IRONY — Inserting an update note here. On Friday, October 20, 2017 TravelMole.com reported this headline: “FAA calls for global ban of laptops in checked bags.” Yes, the FAA finally caught on to what European authorities were saying all along. Very unimpressive, FAA. But at least now they won’t force us to subject our laptops to a high rate of potential theft.]

This CNN article says:
A Capitol Hill source said it would be difficult to institute the ban in Europe without expanding it to flights leaving the United States. European airport security measures are closely aligned with American measures, and U.S. aviation security has had its own failures.”

But a U.S. official disagreed with that assessment.

“The reason we are not looking at expanding the ban to flights leaving the U.S. is because the intel does not suggest that’s necessary,” the official said. “The intelligence is pointing to something else beyond that. This is not an indictment on Europe’s security measures. We are acting on specific intelligence.”

Does the airline industry have any insight into whether this ban will come to be or how or when? Homeland Security is talking to the industry about it but this ultimately comes from the White House, and these days no one knows what to expect from there.

Here’s the best info about the ban:
After reading this post’s draft, my friend Lorrie found this great article by Patrick Smith which explains well.

Smith says among other things: “Lithium batteries have started several onboard fires and were the cause of at least one fatal accident. For years, safety experts have been pushing hard to restrict them from cargo and luggage holds, where they pose the greatest danger. This basically upends much of their work. Ostensibly the ban is an attempt to make us safer, but in practice it might be doing the opposite.”

This Daily Beast article also provides some info and history.

On May 17, the BBC reported:  US and EU reject expanding laptop ban to flights from Europe.

I, and others thought we were in the clear and could plan our travels. But no… as May closed, the question re-opened. Again, there was not a lot of media coverage, but the whispers were there. Then on June 1, this appeared, Laptop ban: U.S., Europe differ over aviation security

And an interesting Computerworld article dated May 27, 2017 provides more things to consider:
Get ready for the coming business travel crisis
Airport rules for laptops and smartphones will change fast, exposing company data. Denial is not a strategy.

How ironic that this time I actually want to buy my ticket well in advance — and the uncertainty of flight law prevents that from being wise.

So I know where I want to go — to Europe. I wonder when I’ll know I can book my flight, or whether I can fly this at all.

Meanwhile, what are my options? What are your options? All make travel to Europe must costlier in both dollars and time.

As far as returning to the States in a year or two, well, that’s very much up in the air so to speak.

Dare I say that once electronics are banned, terrorists will just find other ways. They have no issues with blowing themselves up.

It may be that seeing my friends in Europe is simply not in the cards for me — yet again. I missed my friends in 2014 due to the three month limit of the Schengen rules and was finally going to get to see them. I’m bummed. But of course, this issue is far larger than my travels or yours being disrupted.

I am going to wait and see.

Long-term advance planning was not so doable under my circumstances and I didn’t really have a long-term feeling of where I wanted.

When I left LA to NY, I bought the ticket (cash on Jet Blue) shortly before my departure and got a fine price. (That return was on American Airlines with miles and the one time I feel I was far over-charged; a costly mistake I learned from.)

When I flew LA to Cancun to start my Central America year, I bought the ticket on Delta with just a short advance time and was happy with the price.

When I flew to Poland using American Airlines miles, I paid the $79 fee for not purchasing 21 days in advance and still felt the ticket to be a good deal.

When I flew Pegasus from Sarajevo to Tel Aviv, it was my first 21-day advance planning and I filled those days with travel in Croatia.

When I flew from Israel using American Airlines miles, it was only my second planning of more than 21 days in advance.

All of those bookings were easy. Airline booking agents were kind and helpful. And, although stuck on the tarmac in a Delta plane for many hours once, I can honestly say that all of the in-flight staff was kind, pleasant and professional.