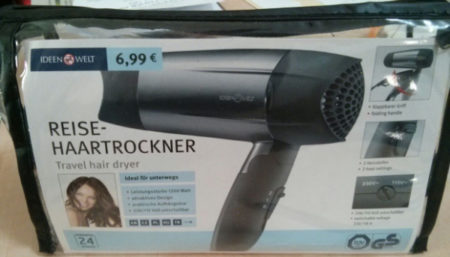 I was absolutely determined this time to carry a hairdryer and have hair that looks nice and polished each day.

That was not meant to happen.

Be careful what you wish for. I am carrying only a 50-L carry-on duffel bag that converts to a small backpack and after logging in around the Miami airport for a day and walking 5 or 6 miles in one day just to find a plane out of Miami and another 5 miles the next day to get somewhere, I was feeling the load. I was wishing my backpack would be lighter and have more room. But there was nothing that I wanted to part with. I had packed carefully, frugal with space, and deemed everything I had to be an essential.

Having finally escaped from Miami because of a sympathetic American Airlines staffer who fully understood the situation, I was in New York City JFK airport. But frankly, I smelled. I certainly did not feel good look decent. I had hoped American Airlines and their Ambassador lounge people would understand the errors made and in sympathy allow me to use their shower for five minutes but their rules didn’t allow for this. So instead I bathed in the public women’s room. And… I blew dry my hair. That was my downfall.

Exhausted upon my arrival in Sicily after too many days of unnecessary travel I plugged in my hairdryer, last used in the US so set to 115v, and just started to use it. In 10 seconds it was red hot. Just as I noticed it, in about 15 seconds total it stopped working. The European voltage of 230 or 240 overloaded it at this setting. It has been a couple of days and I have tried it a couple of times. In one moment it turns red hot and stops working, then it is so hot that it takes a very long time to cool down. The hairdryer is dead. All I can do now is place it in the trash so it doesn’t hurt anyone. I borrowed scissors from the front desk and cut the cord so no one will be hurt trying to use it. Then, with sadness, regret, and a sense of failure I unceremoniously placed it in the otherwise empty garbage can.

I now have extra space in my backpack. I should’ve been careful what I wish for when wishing for more space.

However, I did wish for a hairdryer.

I suppose I need to better prioritize my wishes.

I was determined to look good during this entire trip. I suppose as a backpacker I am never meant to look normal.

I cannot say that I like American Airlines as much anymore.

Time to better cut my hair to look better without blowing it. I am still keeping my great hair brush though. There will be access to other hair dryers from time to time.