I was absolutely determined this time to carry a hairdryer and have hair that looks nice and polished each day. That was not meant to happen.

Be careful what you wish for. I am carrying only a 50-L carry-on duffel bag that converts to a small backpack and after logging in around the Miami airport for a day and walking 5 or 6 miles in one day just to find a plane out of Miami and another 5 miles the next day to get somewhere, I was feeling the load. I was wishing my backpack would be lighter.

Having finally escaped from Miami because of a sympathetic American Airlines staffer who fully understood the situation, I was in New York City JFK airport. But frankly, I smelled. I certainly did not feel good look decent. I had hoped American Airlines and their Ambassador lounge people would understand the errors made and in sympathy allow me to use their shower for five minutes but their rules didn’t allow for this. So instead I bathed in the public women’s room. And… I blew dry my hair. That was my downfall. 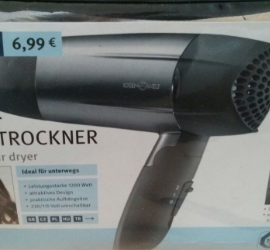