Skip to content
Home » All of Deb’s tales of travel and tech » Deb's Travels » Catania to Palermo by train, finally going to start seeing Sicily 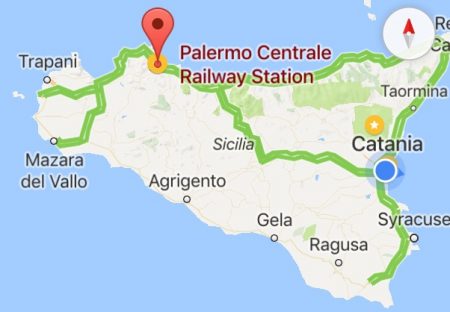 My first morning in Sicily wasn’t where I had planned it. I’d planned to arrive into Palermo, but due to circumstances had to end my into-Sicily travels in Catania instead. This morning I would continue onto Palermo with just enough time to start my first-ever organized tour — Sicily’s Beating Heart Tour with La RosaWorks.

I woke up at 10 — only because I’d set my alarm for the last possible minute that I could shower quickly and still make check-out. Still groggy and with my coordination not intact, I started my day.

But first, a SIM card…

Whether in Palermo or anywhere in Italy, my first event of the day would be to get a local SIM card. Remember, I’m traveling, but I’m not independently wealthy, I don’t have a sugar daddy, and I haven’t won the lottery. I work as I travel.

I asked the woman at the hostel where I should go to get that SIM. She pointed me to Via Etnea, a main and happening street. Wearing my backpack and carrying my daypack, I headed out. Arriving on Via Etnea, an official TIM store was straight ahead. I liked their help and the pricing — just €10 for the SIM and €10 for a month of service. Just to be sure, I walked down Via Etnea a bit and inquired at another cell store. The TIM deal was far better so a few minutes later I was back there. Some waiting and many questions later, I had my new phone number. And… because all cell providers in the EU now have to provide free roaming, I was covered for the rest of my time inside the EU. (As long as I set myself up to renew it online for when outside of Italy, which I didn’t do.)

Now to the train station

To walk to the train/bus station, I opted for a path that took me to the coast. On a warm summer day, I will always prefer to walk near water.

WIth the water in view and the train station somewhat in sight, I stopped for gelato. (€2) My first real gelato since 1986! I asked for coffee and chocolate but ended up with coffee that has chocolate pieces in it. OK, not my dream gelato, but still a nice treat. 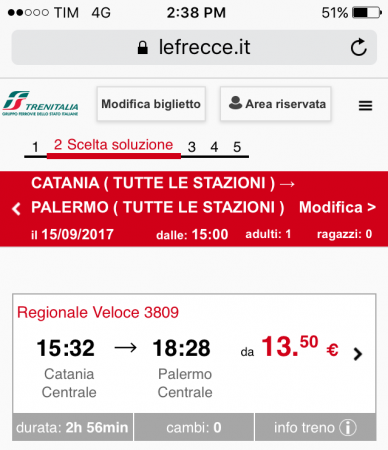 Sitting at Gelateria Pellegrino’s outdoor table at Piazza Martiri della Libertà at 2:38, I took out my iPhone and looked at the train schedule. Thank you, TIM, for the cellular data to enable me to do this.

(I’m sorry I don’t recall how I found the website shown in my screenshot, but TrenItalia.com has an English option. Trenitalia is the name of the train company of Italy.)

About 40 minutes until the next train. Perfect.

Gelato-satiated, I donned my backpack again and crossed the traffic circle and street toward the water, Via VI Aprile and train track and enjoyed my water-side walk toward Palermo. I might add that the water wasn’t really visible here, but that was ok.)

I might add that the water wasn’t really visible here, but that was ok. I think they created a nice, track-side walkway. 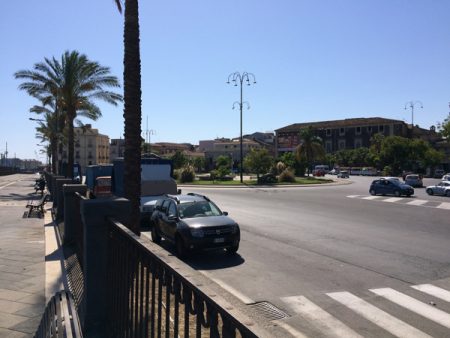 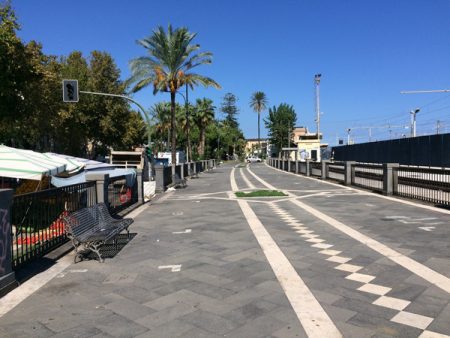 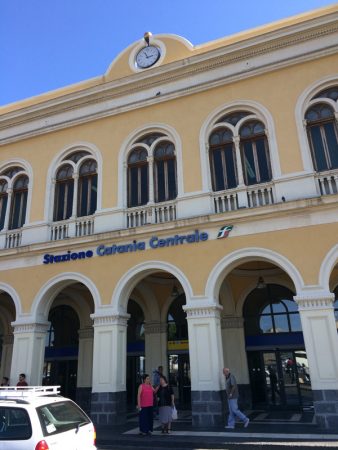 It wasn’t long before I reached the train station.

Arriving in the dark and so tired the night before, I hadn’t gotten to appreciate the station. Today I stood back and admired it for a while before entering these front doors and following the sign to the ticket windows.

There was only one person in front of me in line.

I used my credit card to buy my ticket which was €13.50. (It’s great having a credit card that doesn’t charge international fees and also gives me frequent flier miles to travel more.)

I never like having to read long listings of on bright boards, so I asked if she knew what track and she told me number 3. 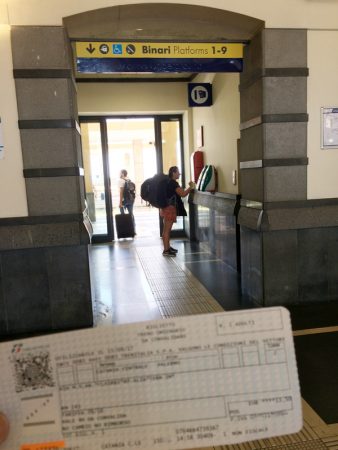 If you’re wondering how to find a train track in a foreign language or a foreign country here’s how. Train stations make it pretty easy for those of us who speak English. Notice, the platform sign is in both Italian and in English. And numbers… well, they’re numbers.

Immediately through this walkway was another sign telling me I was at Track 1 and that Track 2 and 3 were downstairs.

It was a nice clean and clearly marked tunnel and very short walk. 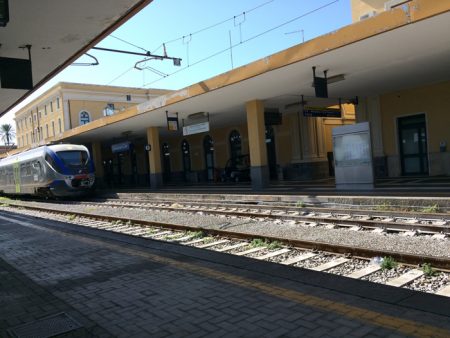 I had about a 30-minute wait for the train. I sat down on the bench with some of the people waiting and wrote this entry.

The train arrived. It’s very nice inside! It feels new and clean and it’s comfortable. You can see the seat that I chose. I liked the legroom and I could put my feet up on my Eagle Creek backpack. It might seem odd that I show you a photo of a toilet, but isn’t it nice to see how spacious and clean a train’s bathroom can be? 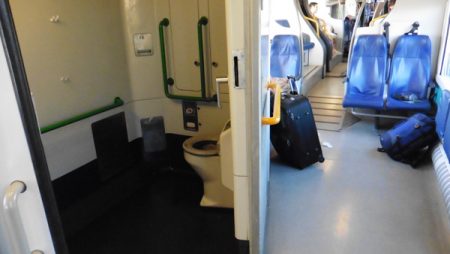 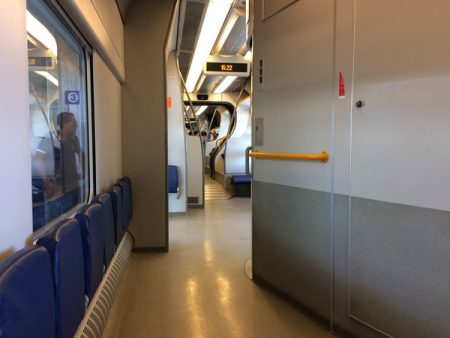 Here are 5 photos of the Sicilian scenery.

I thought this would be a solitary ride. The Italian man in the next seat was helpful showing me the electrical outlets, but we were not going to have a conversation. Then a young blond woman and her boyfriend came onto the train and asked to share the 4 facing seats of the man. I heard some English. Soon I said to her: “you speak English” using a bit of a questioning intonation. She speaks it quite well. She is from Russia. Living in Moscow for work but from Siberia. Her name is Tatiana A. We had great conversation. Before speaking with Tatiana, my only association with Siberia was that of a place of frozen exile. I’d certainly never considered Siberia as a place to visit. Now, who knows? I may visit — but only in summer. We also had some good conversation about American-Russian politics and I got to learn more about life in her part of Russia.

Soon I was standing in the Palermo train station. 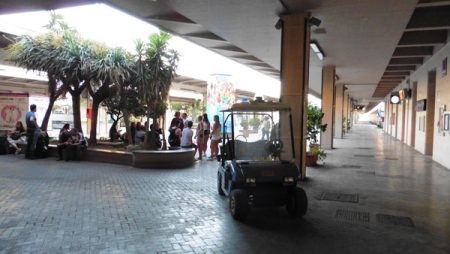 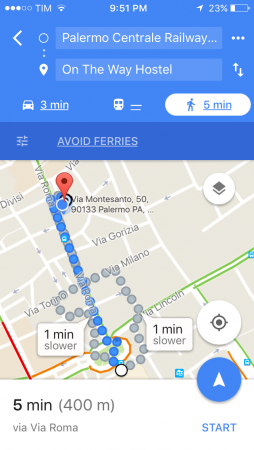 Once outside, I popped the address of the On The Way Hostel into my iPhone.

I took a few photos of the area, then watched my blue dot progress in relation with the path of blue dots. (Google doesn’t create smart user interfaces.) I really was at the hostel in 5 minutes. Well, 5 minutes of walking, but many minutes of photographing and of looking around and reading signs in store windows.

If you’re into staying at hostels or are interested in budget accommodations that can help you see the world, you can read my post about On The Way Hostel in Palermo. (In addition to the dorms I experienced, there are private rooms, an apartment and a B&B.)

The roundabout and area by the train station