As you quickly learn when you travel with just one bag — for any amount of time — every bit of space matters. As I was packing to move from Costa Rica to Panama, I had one of those moments of celebration… The celebration when you gain a bit of space, when you get to downsize even just a tad. Most of you will laugh at this one. I did. But my finally! grin was ear to ear at the time. The moment? When I finished a pack of dental floss and was able to fit the floss from my bigger container into the smaller one. I know you’ll wonder why I’d I brought two. It was because I had them when I left LA, each was partially used, and I was sure neither would last long. I am seriously amazed how long each lasted.

The other day as I was rushing to be somewhere in San José, Costa Rica, a large dark car pulled over and the front passenger door opened. Each time I have walked this route I have noticed the cars pulling over and picking people up. With each car that pulls over I look and wonder for a moment if that car is someone from the synagogue pulling over to give me a ride but it is a silly thought; I am not well known and few people make this drive. This time I glanced at the car that stopped and suddenly realized that I recognized the man and the car HAD stopped for me. It was a nice feeling to be recognized and to have someone stop for me.

Being out of the United States, I barely realized Thanksgiving was coming, But the message did come through and I must admit it was a lonely feeling to realize I would be alone and not have a Thanksgiving Dinner. And then a huge surprise – an invitation from a CouchSurfing hostess who lives near my hostel. She invited me on Wednesday night. Of course, the dinner was delicious. Turkey, stuffing, and more. Something new for me: Costa Rican sweet potato mixed with orange juice baked and served in orange halves. Topped with marshmallow, of course. I really enjoyed the company too. I even learned a new game sort of like charades. Are you wondering how I realized Thanksgiving was coming? For one, via TV. (Gotta keep up on the Middle East and I have been catching a couple of my old Soap Operas while working online during some days. Also, […] 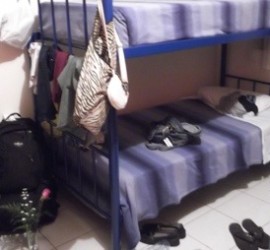 I think some of my friends will get a kick out of this, This is the bed I had in a small home hostel in San Jose, Costa Rica. There were three bunk beds in the room. Most of the time I had this room to myself. A few nights there would be another woman in the room. This room would have been a children’s bedroom before the house became a hostel, but the room has no closets. As is typical, bunk beds in hostels double as closets for clothing in use. Notice the flower. Flowers were a gift from my friend Kidron. Having a flower in my room was a unique travel experience. It isn’t too often that I sleep in a bunk bed, but at least when I do I typically get the bottom bunk!

Friends and I went to see a volcano, called Volcán Poás, near San Jose. ($7 round trip bus nice ride in a comfy bus, $10 admission.) My friends and I ever saw the volcano lakes due to rain. But this is a vivid part if the ride home. I suddenly noticed this amazingly real rainbow out the bus window behind two of the guys.

When able to shop and have a clean bowl and spoon, I have been buying Granola for breakfast. At times that granola has been lunch or dinner instead or as well. This is today’s breakfast granola. I selected this brand — alin: Alimentos Naturales — because it is made in Costa Rica. The 250 gram (8.8 ounce) bag sells for 710 colones ($1.42). One of the fruits and something else (a nut?) in it are hard and a bit of a shock to the teeth, but it is a good mix anyway. I bought this same one once last week and it was a great late night smack eaten out of the bag slowly. This is the first time in all of my Central America travels that I have purchased milk in a “regular,” not the new box style container. This Costa Rican-made Coronado brand 1 liter milk was 505 […]

Last night I walked (about a mile) to the supermarket. First stop, the fish counter. Fish has been all too rare in my diet on this trip. They had some very nice looking fillets. One was Tapia, which is too bland for my taste. There was another white fillet that was less money. As I am not traveling with my spice cabinet, I preferred to gamble on the flavor of the other. So here is my mystery fish of choice. These two pieces were 967 colones. At an exchange rate of roughly 500 per dollar, this was a $2 gamble and each piece was $1. I do carry an excellent Spanish/English dictionary (by Ascendo) with me so I could have looked up the name of this fish. I considered doing so, but I wanted to keep the adventure aspect of this shopping trip alive. Plus… I trusted my judgement that […]

If you like American Sour Cream, you might love this sour cream in Cost Rica as well. To me, it was like having either Sour Cream or Cream Cheese, only not as sweet. It was also somewhat reminiscent of the fresh cream I loved so much while living on a working farm in Tasmania, Australia years ago. (I ate that cream out of the tub! The Australians found that rather entertaining.) I actually found this next to a liquid Cheddar Cheese, not beside the plastic tubs. I have seen and enjoyed a plastic container of “American Style Sour Cream” when a friend bought it. That was a creamy sour cream just like we eat in the States, but without sugar. It was also more fresh tasting. This bag is the same – but less costly as it comes in a bag. I have been using it as a pasta sauce, […]

If you’re in La Fortuna, Costa Rica and are wanting to go white water rafting, ride a zip line, or do whatever else is offered there, the person to find is Christian. You’ll hopefully find him at Sabor Tica, an excellent restaurant (called a Soda). Find Christian and let him bring you in to book your tickets. 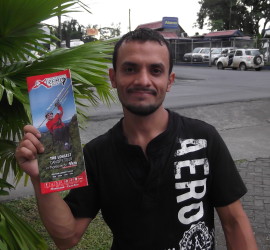