Skip to content
Home » All of Deb’s tales of travel and tech » Traveling with Technology » Before cellphones, before answering machines… 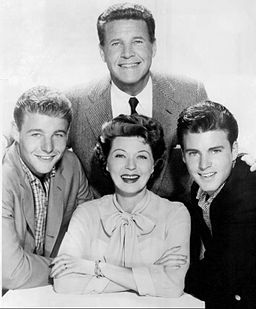 I write these insightful, only somewhat travel-related words as I am watch The Adventures of Ozzie and Harriet (Nelson), a show that was on  American TV from 1952-1966. (It’s on retroTV and I’m seeing it at a friend’s home near Fairfax/Hollywood in Los Angeles.)

Those of us who travel have often done without telephones and technology, thus re-learning how great it is to have a cell phone. But for those living a daily life in “developed” areas, lest we forget the convenience cell phones have brought to our lives, The Adventures of Ozzie and Harriet is a great reminder. 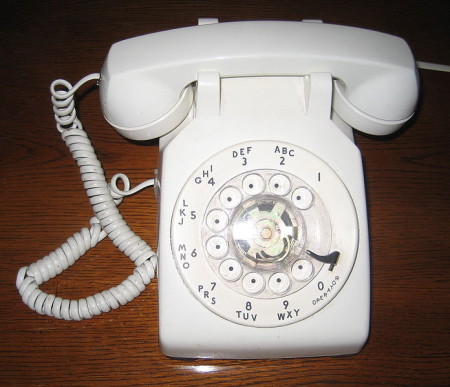 Photo by Infrogmation
via Wikimedia Commons

In The Chaperones, January 25, 1961, there was confusion about the location of a party so most of the show featured Ozzie and Harriet — the would-be party chaperones, and a son and his date running all around town looking for the party. They did call the first might-be house but when there was no answer, they figured the party could be so noisy that no one heard the phone.

In Mr. Kelley’s Important Papers, March 1, 1961 their friend Clara (who is returning a borrowed typewriter) hears the Nelsons’ phone ring, picks it up, and is told that their son’s attorney-boss, Mr. Kelley, called and needs some important papers by the next morning but he’s in a resort at Ripawan Valley, which is a plane flight away. They need to find David and get this message to him. They start by enlisting their other son Ricky’s help and the three of them spend an entire afternoon calling all the girls in his little black book, calling the malt shop (the line’s busy for an hour), the bowling alley, and more. Finally, David calls home, saying he heard from a friend that they were looking for him. Only by then, Ozzie got it in his head that his wife had set up a fake situation so she could go for a weekend vacation. Thinking this, Ozzie tells David that nothing’s up, rather than giving David the message from his boss. Hanging up, he learns it wasn’t a ploy to go to the lodge. Now he needs to get the papers delivered, but when David called, he didn’t say where he was calling from. Oops. Can’t reach David — again. So they have to gain entry into David’s office, get the papers, and fly up the lodge themselves.

Today, all of that would be one phone call to David’s cell phone and a trip by David to his office and then to the nearest FedEx office. And the party issue would have been solved with a text (and per one of the original uses of Twitter, before it was overrun by marketers, a tweet to announce the party location).

As Ozzie and Harriet board the plane, the show cuts to David coming home and Ricky telling him. But I can’t share the rest of the story because AT&T U-Verse lost signal so I missed it.

Well, some things haven’t changed much. We just don’t have an antenna to wiggle now when we lose TV signal. But I do have an Apple MacBook Pro on which I can log onto the internet, type this up, and post it to the web.

[Thank you to incredibletvandmovies.com for your episode listing that enabled me to find the episode title and date online.]

And in my own real life…

I’ve been rereading my 1985 travel journals. In Paris, I mention crossing Paris back to my friend’s apartment to make a phone call because when calling from a pay phone being on hold a long time each time kept eating up my coins. Who were we calling? A ride-sharing office called Allostop — because we found rideshares by calling in.

On another day,  waiting for my friend or her waiting for me for 45 minutes because one of us gave or had a wrong metro stop or directions. (Thankfully us travelers were patient and we waited an hour knowing our intended companion wouldn’t simply stand us up.)

My travel journals are full of such stories.

These little things are the reminders of how times have changed since my first travels — and have changed in society.