Skip to content
Home » All of Deb’s tales of travel and tech » Deb Fixed It » Traveling Mac Maven strikes in Prescott, AZ

Day 1 in Prescott, Arizona — February 18, 2014:
I arrived in Prescott to clean up and repair a MacBook Air, having already saved it from daily Kernel Panics via phone. How did I end up in Prescott? A client from Beverly Hills has moved here. 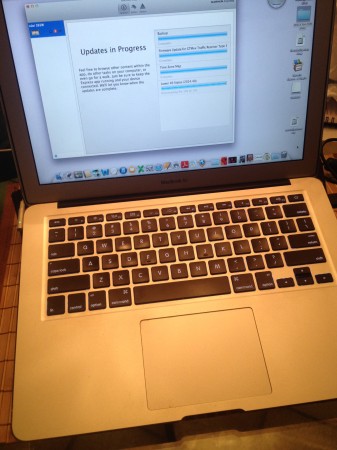 Day 9 in Prescott, Arizona — February 26, 2014:
The woman who’s Mac I just resurrected told Apple techs that her Macintosh was about to be “the most expensive frisbee ever made” because she was ready to throw it against the wall. She’s had an ongoing love-hate relationship with all things Mac (and she’s had 5 of them) and now she’s l-o-v-i-n-g her Mac again! She has give me the title of “Residential Macintosh Intervention Maven.”

After I dealt with the software-caused issues and ran diagnostics to assure her that her hardware was not the issue, I embarked on a massive file clean up. As an intrepid world explorer, I became somewhat wary of opening her myriad folders called “Desktop Clean-up,” after opening the first few so-named folders and being greeted with other such folders within. However, each day I soldiered on and when I was done 150GB of hard drive space was reclaimed and the Mac was fast and lean.

The OS is now updated to Mavericks (from Lion), all old apps are now completely gone, all other apps are up-to-date, and her multiple AppleID problems are solved.

She’s excited that she now knows how to recognize how she’s been creating the problems. She now has the tools to work efficiently and effectively on her Mac.

As with much of my Mac or Web work, the solutions we discussed for her maintainence became fodder for my Macintosh segments on Computer Talk Radio.

The icing on the cake for me tonight was hearing her teach her sister about backups and the difference between cloning, backing up, and archiving.