I happen to be in Portobelo, Panama during the Congo Festival. In the early afternoon four men dressed up for this traditional celebration came up to Captain Jack’s, whistles blowing, acting in the traditional goofiness. Their faces were painted the blackest black, making their lips ever-so-pink and they were always sticking their tongues out. That is part of the celebration, which is to mock the Spanish, their former enslavers. (In the days of the Spaniards here, people were brought from the Congo as slaves.) Later in the day, Gary and I were walking in town and watched as the men surrounded a car in the road and one man stepped in front of the car and laid in the road with his feet up on the hood of the car. Still later, we were walking home from seeing the Negro Christo (Black Jesus statue) when the guys noticed me and […] 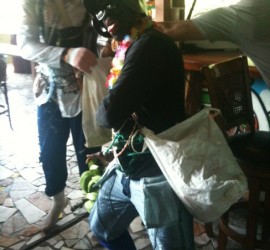 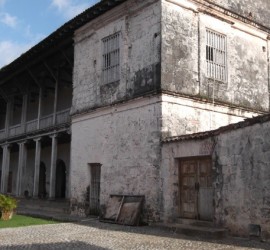 This fort is the closest one to the town. It’s the easiest one to visit as no boat is needed. However, the other one is the first line of defense and is three levels and more interesting. (You can get to the other one by renting a kayak and enjoying the harbor as well. It is difficult to see here but that long wall is where the cannons are. They are clearer in the next photo.

On Thursday, January 17 (2013), my <a href=”http://travel-friend Gary L. Smith and I got on a $1.25 Metrobus from MultiCentro to Allbrook Bus Terminal, then took two more busses to come to Portobelo, on the Caribbean coast here in Panama. Portobelo was an important port in the 1700s and 1800s as much trade took place here. This is where Portobelo is located. 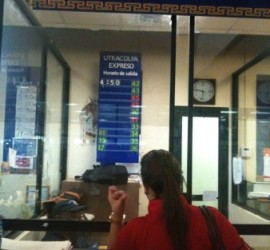