On Thursday, January 17 (2013), my <a href=”http://travel-friend Gary L. Smith and I got on a $1.25 Metrobus from MultiCentro to Allbrook Bus Terminal, then took two more busses to come to Portobelo, on the Caribbean coast here in Panama.

Portobelo was an important port in the 1700s and 1800s as much trade took place here.

This is where Portobelo is located. 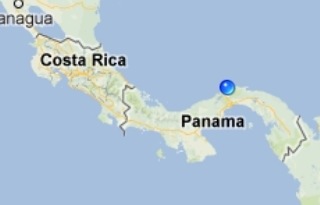 This is the window you start at in Allbrook. It says UltraColon. (There are other windows that say Colon.) 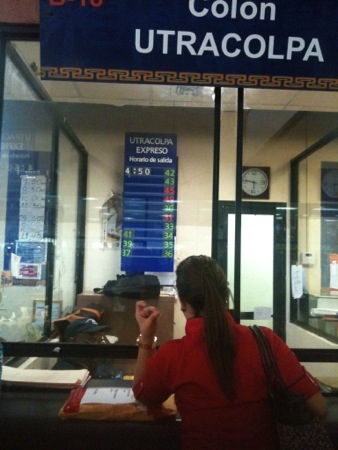 Our route:
The bus from Albrook Terminal (the only bus terminal) travels along the yellow line. When it gets to a town called Sabanitas, approximately below the “t” in Porto Pilón, This nice, large comfy-seated air-conditioned bus makes a regular stop where we got off. (That bus continues straight ahead to Colon.) We paid about $3.15 each for that bus. The ride was about 45 minutes.

Here is a close-up of Sabanitas. 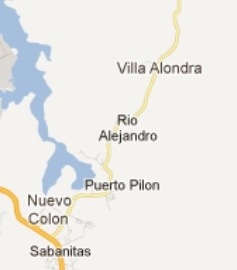 We then walked to the corner (which is just steps) and turned right (just a few steps) and caught the “chicken bus” or Diablo Rojo toward the coast along that thinner yellow line and then to Portobelo. (Actually, we stopped at the supermarket that is right there and also bought some fruit from the fruit stands that are right there. But there are fruit trucks that come around in Portobelo and there are small supermarkets in Portobelo as well, so there was no need for us to have done so.)

The Diablo Rojos are old school busses that are wildly painted with colorful graffiti art. The inside front is almost always red and has images and ribbons. They have horns inserted into their air brakes to entertain you when they stop. Tires and maintenance are questionable and is up to the driver. They play music loudly as they travel the roads. People sit three to a seat on the wider seats, two or three on the narrower seats. The aisles are packed.

This is the inside of our bus to Portobelo. I was able to take this photo after several people got off at the first few stops. That is when I could sit and also see the driver and his assistant. The assistant is sitting on a barrel. The riders are local folks — except for me and for Gary, who is in blue. 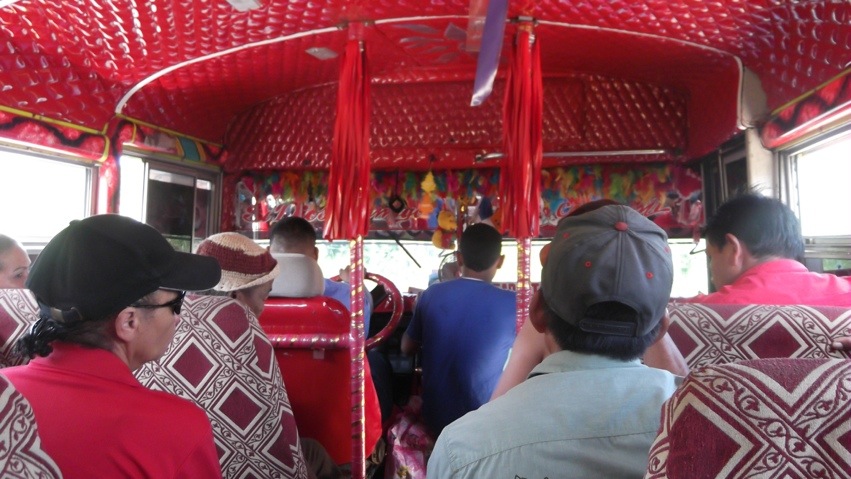 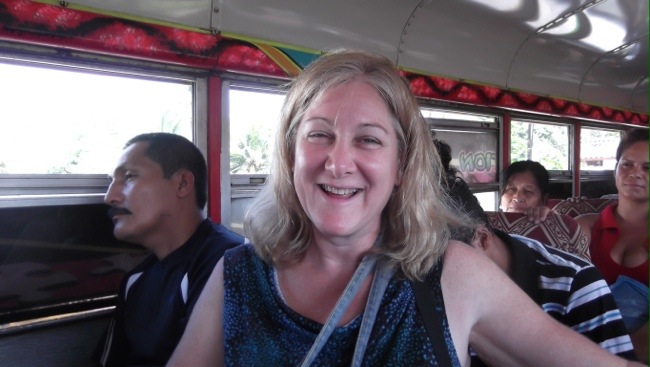 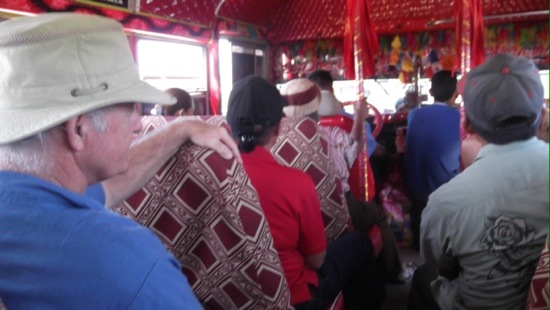 The music on the bus adds interesting flavor to the experience. It is reflective of the culture as it is the personal choice of the driver. The same busses exist in Panama City, but there, the culture is Latin. On this coast of Panama the population is descended from the Caribbean islanders who came to Panama to build the canal. The music was mostly Spanish as I recall. (And at one point I realized I knew what was being said in some of the songs.)

This is one of my first glimpses of the coast. 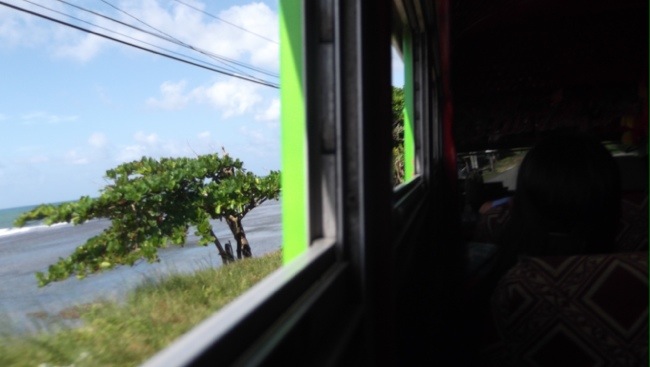 This bus ride was about an hour. Some travelers on motorcycles said the drive is actually just under 30 minutes. We paid a little bit more than $1 each for this bus.

This bus dropped us off immediately at the small road we then walked up to arrive at Captain Jack’s, the hostel which was our next immediate home. I’d asked the driver to tell me when we were at that location. It is easy to see this stop because Jack has a large black sign planted at the corner.