As I traveled to Warsaw for the first time, I felt like a VIP knowing my host, Michal, would be waiting for me at the airport — holding a white sign with my name on it.

The airport wasn’t crowded. The plane I’d arrived on was small and my fellow passengers were the only others exiting the airport. I was the only person wearing a huge backpack so Michal would know me for sure, but the sign let me know him — and was so cool!

How odd it was to not have to go through customs and get grilled about my plans. The something to declare and not declare halls were empty and even closed. Although I did go through a very empty customs in Berlin. I was asked in Berlin only “how long will you be in Poland?” That was it! Schengen Zone Europe is very different for Central America or the old Europe I last traveled so long ago. I was off the plane and meeting Michal very quickly.

Michal insisted on carrying my backpack. He tossed it over one shoulder and led me the short distance to his car. As he drove me home, he told me about his girlfriend Joanna (pronounced more like Yanna) and that she was making me a traditional Polish meal for my arrival. Wow.

Michal owns a rather newly-built flat. Modern and clean. IKEA glasses, plates, furniture. And a real bedroom and bed for me. He lives there with and a big dog named Maya. (I am not a dog person, especially big dogs, but Maya is so quiet, sweet and clean and she never once licked me or jumped on me so it was a pleasure to be a guest in her home.

I arrived not just to a beautiful home but to the smell of home cooking. Joanna made Pierogi, a traditional Polish meal. Pierogi are typically filled with potatoes or a minced meat but as Michal and Joanna are vegetarians, these were filled with berries. They were terrific — and plentiful. I’m sorry I don’t have any photos to share with you. I was too busy eating and getting to know Michal and Joanna to pull out my fabulous new Panasonic Lumix camera.

Everything Joanna cooked later was terrific as well. 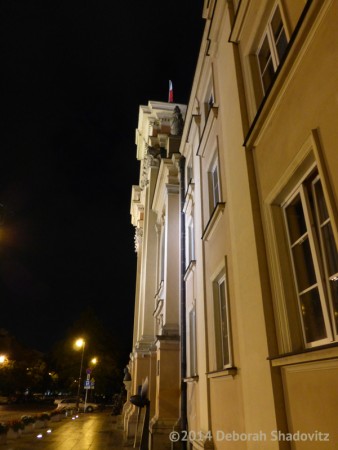 After dinner, Michal and Joanna took me to the “old city” and “new old city.” As it was summer, we had many hours of light.

My first outing in a new country is always exciting. Even if it’s just walking to a food market. But in this case, being taken around by a life-long resident of Warsaw was particularly nice. Johanna had just come to live in Warsaw so our outings were for her as well. I had lucky timing to be part of it.

Warsaw is a mix of a lot of very new, a bit of pre-WWII old, and 30-40 years of USSR-period building (during the 50s to 80s)  that isn’t considered nice looking by pretty much anyone you talk to in any former Soviet state.

The roads by the airport and where Michal lives are quite new and modern as is much of Warsaw. We drove on wide, perfectly paved, well marked, traffic-light controlled roads as we headed to the old city area this first evening. Free Poland is enjoying building their own city now.

We parked near this building and our first stop was a fabulous sculpture — a memorial to the Warsaw Uprising. The closer I looked at it, the more impressed I became. As this photo is taken at night you can’t see the details, but at the right, the resistors  are coming up through a manhole. 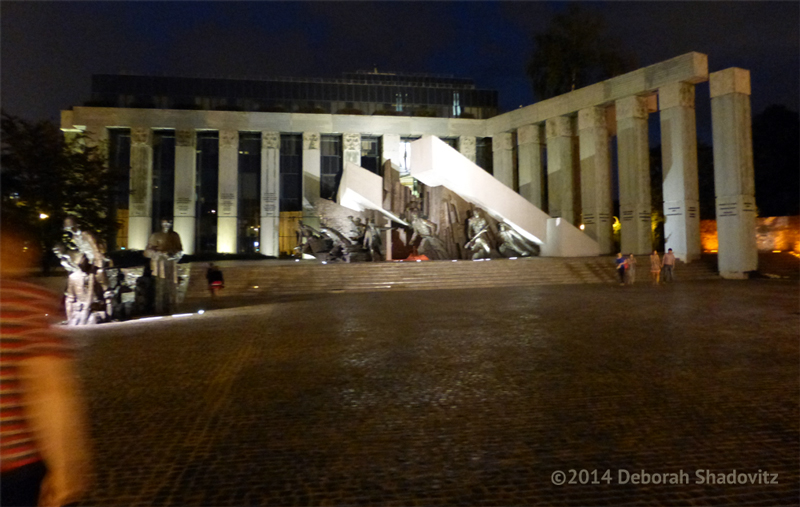 The Warsaw Uprising Memorial at night

Here it is by day, taken when we returned the next day. 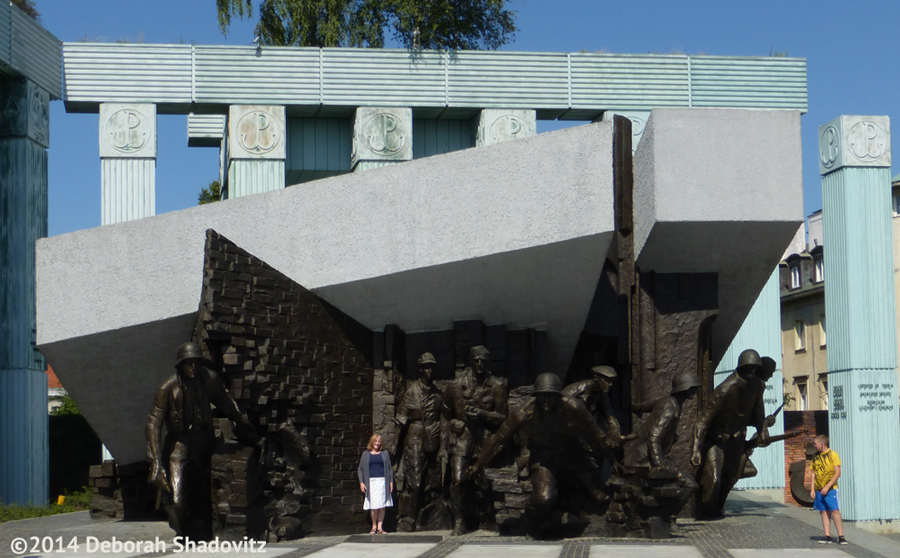 Part of the Warsaw Uprising Memorial by day. I don’t know the guy in the yellow.

I’m showing you two shots so you can see more detail. As you stand in the area, you really think the men are coming out of the ground. In this shot, you can see the other men behind to the right.

Here’s a link to the Wikipedia article about the monument in case you’re interested. 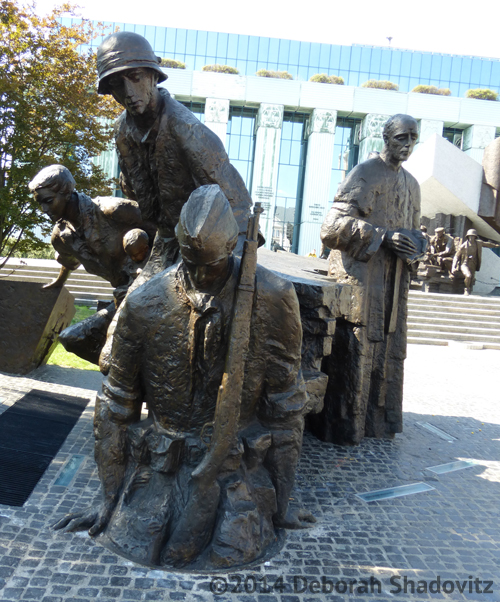 The other part of the Warsaw Uprising Memorial by day

Unfortunately, unseasonal rain soon cut our first night outing short. But I knew I’d see the area by day the very next day, and as you see by these daytime photos, I did!