This happened to me in a major city in Spain in 1985 and happened to several other backpackers at the same hostel. I was wise and lost nothing. Others lost a lot. It’s still happening in 2018. All these years, I have remembered what happened and my actions.

Someone walks up to you and shows you that there’s some kind of cream on your back. He/she offers to hold your bag while you wipe it off. You give him your bag and he’s gone in a flash. Or maybe he helps you clean the cream off and helps himself to something from your bag or pocket as you’re distracted. You’re not supposed to realize that he or a partner had put the cream there. 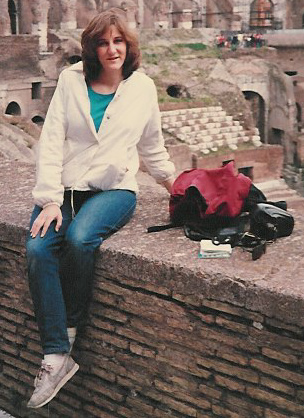 Me in Rome wearing that same white jacket, with that day pack and SLR.

My experience and how I thwarted the criminal

I think I was in Madrid. I was walking alone on the wide sidewalk of a major street when a man came up behind me to my left. He swiped his hand on my back by my left shoulder and showed me that there was some kind of white cream on his hand. Shaving cream, I think.

I was annoyed and my face certainly showed it. I was wondering how I could have been so careless, so unaware as to get such cream on my back, I wondered. It never occurred to me that this man had put it there.

He grinned. Shyly, I recall thinking at the time. Later I realized that sheepishly would be a better description.

I didn’t want to be walking around covered in shaving cream so I wanted to clean it off immediately. In my annoyance, wanting to deal with this quickly and get on to wherever I was going, I declined his offer of help. I didn’t speak a word of Spanish at the time. I recall kind of shooing him off but more in self-disgust.

He left, I think. I never noticed him again. He didn’t approach me again. Interesting way to thwart a criminal.

Maybe it’s because I’m from NYC but I immediately looked for a secure area to clean it.

There was a white post fence along the sidewalk on my right. I noticed that a few steps ahead, there was an alcove a few shallow steps down, It was at a 90-degree angle to the sidewalk fence so no blind spot. I wouldn’t be so far inset that there’d be a blind dangerous space that way either. Just enough that I could put my day pack down out of the flow of pedestrians and not be vulnerable. I recall there was a shallow step or two down as well.

I stepped into this alcove and into its right corner.

With no one able to approach me from the right or from in front of me, I knelt down and put my daypack down under my right knee. It was now secure. My SLR camera remained around my neck as always. Then I spread my jacket — a lined windbreaker, easy to wipe off — down in front of me.

The outside pocket of my day pack had plenty of tissues in it — both clean and used. (This was not just handy for me but was also not nice for any pickpocket, as gypsy kids in Rome found out when they opened it using distraction.) It was easy for me to pull out some unused tissues out to wipe my coat clean.

As I wiped my coat with one hand, my other hand not only held my coat in place but also pushed down onto my day pack, helping to secure it.

I also carried water so I was able to use some to further clean my jacket. (Before we drank plastic water, backpackers carried metal army canteens.)

Jacket cleaned, I stood up, carefully picked up my backpack, and went on my way.

Talk of theft among the hostel

Arriving back at the hostel, someone asked me if I was ok. I was surprised. A woman named Deborah (or maybe she said Debbie) was robbed today at the [wherever it was I’d gone] and you were heading there. I thought maybe it was you.

No, I’m fine, I replied roughly in these words. Nothing happened to me. What happened to the other girl?

I was told her day pack was slashed with a knife and her contents were stolen.

I felt bad for her and conversation amongst some of us backpackers continued. At some point, I told them of my stupidity getting cream on my back. That’s when I learned that the cream was a known scam. The perpetrator would put the cream there. Sometimes his friends would steal your bag.

And I learned about having a bag cut as well.