This scam happened to a woman visiting the City of Manila in the Philippines. Please know she is fine now. She shared it so others may learn from it and avoid it. She has since learned that it’s a common scam there.  Others have reported something similar in other countries, even to a man in Japan. The getting-drugged part is extremely common but it typically happens to young travelers in bars, not a mid-day to mother, to an older woman.

The sad thing is that she enjoyed what she felt was an authentic experience with local women and she’d have been happy to pay for it — without being drugged and robbed.

The cool thing is that this hasn’t scared her off of Manila, the markets, or the Philippines and her travel adventures will continue.

A solo traveler, a single mature woman, was walking around Manila at just before noon recently (early 2019). She was walking to the Salcedo weekly food market, near the upscale area of Makati. Both are areas that people would expect such a thing to happen. (In fact, the day before, she walked plenty of miles through both wealthy and poor areas by herself.)

As she walked, a 60-year-old grandmotherly woman who called herself Gina asked her if she knew the way to the Salcedo market. (Of course, we know she likely knew the way quite well.) The traveler said yes and invited her to walk along. Gina shared the story of her life: married at 15, a career as a chef, mother, widow for 10 years, grandmother. She said she was from a province called Ilocos and was meeting a friend (which would explain not knowing the way to the market).

At the Salcedo market, Gina wanted to share a true Filipino food experience. (Typically, that’s a fantastic opportunity that every true traveler craves and appreciates. One not to miss.) She brought two drinks over, one mango, one cucumber, for our tourist friend to choose. (So far this seems safe.) She then followed with various dishes. (Again if they are sharing, this seems harmless but Gina was doing all the food handling, which could have been an issue. In this case, I believe, it inspired trust.)

Soon Gina’s friend arrived, but not just a friend. Two women. One called herself Sazzann and said she was 67 and that she has a mango farm in Ilocos. The other was considerably younger, called herself Baya, and said she buys clothing in Manila to resell in her own town. This opened the door for Baya to ask to move to a cheaper market. The three women invited her along. (Again, this is an opportunity for a real shopping experience.) 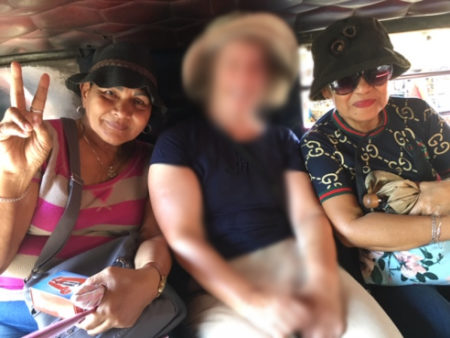 Traveling by local bus (it’s always safer than getting into a stranger’s car), they traveled to the Baclaran market. Gina and Baya each made one actual purchase. 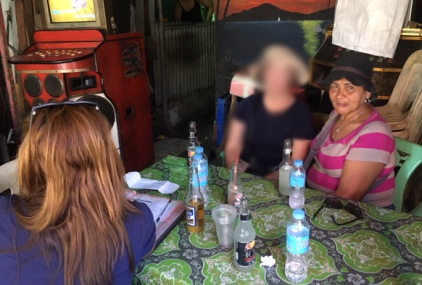 Next, the women decided they were ready to leave the hot noisy environment and asked if she’d like to join them for a beer, traveling by a popular transport called a Jeepney. (Who wouldn’t want to now?) Baya, the younger woman, took this photo en route

The women selected an open restaurant/karaoke bar and Gina announced that two of her nieces lived nearby and would join them to practice English. (Good, logical reasons stated to invoke trust.)

This time Baya buys her a drink — Tanduay —  a local Rum they said was only 5% alcohol. (Wikipedia) She accepted the drink.  (Who wouldn’t want to?)

The nieces arrived. They were supposedly studying business administration.

And then came a this-decade travel and tech red flag: they put off the invitation to Friend on Facebok.

And another tech event not realized at the time: one niece spent quite a while looking at our travelers iPhone. (In this case, it turned out, deleting the day’s photos. But bear in mind that your photos may also show your arrival at your local accommodations and that opens you up to later theft or issues. And perhaps you take photos of your hotel bills or other things that give away info such as bank info.)

More food, drinks, singing by them… until around 4pm, the nieces suggested another venue change — to The Mall of Asia. The next mode of transit was a Grab taxi, which ironically is a safer way to hire a taxi because it’s done via a smartphone app.

Other ride-hailing app services
Grab taxi covers Southeast Asia, in over 500 cities and towns.
In Russia, Israel, the UK (including about half of London’s black cabs) there’s Gett.
In the US, Get Taxi joined with Juno so is now Juno.

Again, a red flag, but beyond our traveler’s control — the group stopped yet again for food and drink.  This food and more drink were passed around. Weren’t they already full and satiated? Anyway, if a plan included drugging our traveler with this drink, it shouldn’t have worked because having had enough to eat and drink, she didn’t accept any.

After about a half hour in the taxi, our traveler asked what was happening because they weren’t at the mall yet. It’s near the airport and the planes around them told her it was near.

And that’s the last thing she remembers until around noon on Sunday when she suddenly found herself walking from a bank near where she was staying toward her accommodations. She had just received a text message warning her of potential fraud.

Unsteadily walking the 2 blocks to her accommodations tripped on the sidewalk, ripping her new pants. A passerby saw, helped her up, and walked her back.

Her logical conclusion is that she was probably drugged with Lorazepam (Ativan) or such. That’s the “date rape drug” that’s a sedative that can cause amnesia and loss of orientation and more.

She realized the building where she was staying has CCTV  and asked security to see what time she came home. However, 6 days later, there was no word on that.

Happily, she called her bank quickly so the card is canceled and they’ll reimburse her that money.

She also traveled with a Canadian-dollar Visa card. That one was untouched. Perhaps because she couldn’t recall its PIN.

They left her passport, health care card, and driver’s license.

She thinks they made sure she got back to her accommodations.

Travelers say it’s common for these theives to take not too much and get you back at your accomodations, you won’t go to the police. For certain, if they take passport, driver’s license, and health care card (depending on your own country), you’ll have to get the police involved.

All of the day’s photos were deleted, likely by the niece who was “looking” at them so there would have been no photos to show the police so they wouldn’t bother with the theft. However, our traveler found some and mentioned that she had photos.

The next day, she went to a local walk-in medical clinic to learn about the drug and potential health issues. (Just $12.50 to see a General Practioner. Well worth the fee.) The GP told her to watch out for seizures, shortness of breath and excessive sleepiness if they happened or continues for more than two days. The GP also offered a toxicology exam to determine the exact drug. Our traveler didn’t opt for that because she wasn’t feeling lingering symptoms to cause worry or need. (For those of us who need medical attention as we travel, know that she could also have seen a neurologist for only $29.)

The take-aways for all of us

And this doesn’t really pertain but I’ll always remind you…
Just like in all cities, and smaller places as well, watch your handbag, your backpack, etc. Keep your hand on it at all times and keep it on your lap as you sit.

Be careful! But don’t let a bad experience ruin your love of travel or your desire to experience the world.

“I have to let this go and chalk it up to a bad experience which could have turned out a lot worse.”
~Our traveler