I’d left Ljubljana, Slovenia for Bratislava, Slovakia because of my plans/ticket to fly from Bratislava to Tel Aviv, but I had a full week of more in Bratislava and although the capitol, it’s not a large city for a person traveling through and staying at a hostel.

It’s common for a traveller to stay in Bratislava and do a day trip to Vienna, Austria which is just 100k away, only €5 ride each way. I’d considered doing this, but I’d been to Vienna and much of Austria on my first world travels (those epic 3 years of solo travel). It’s also common to go to Budapest, Hungary from Bratislava. That’s a 3-hour train or bus ride. However, I’d also been to Budapest and other places in Hungary during those first world travels.

The other popular destination is Prague. It’s also a relatively short train or bus ride. As I had not been to Prague or any of what was Czechoslovakia during my first travels, I decided that a couple of days in Prague, Czech Republic (as it is now called) would be a new experience and more worthwhile. So today, having relaxed and enjoyed much of Bratislava at my leisure, and knowing I needed to be back there for my friend Annaline to arrive and travel with me to Israel, it was the perfect time to take my side-trip.

I got out of bed at the Hostel Folks hostel in Bratislava, Slovakia around 9 and showered. (I really loved the showers there!)  Then I selected some things to take to Prague in my ChicoBag daypack and packed up my main backpack (the EagleCreek Hauler) to leave at the hostel for the next two days.

Packing for a two-day side trip in cold Europe

I am bringing only my daypack. I am wearing the sweatshirt dress (I bought my first evening in Bratislava) because there is no chance it will fit into that daypack with anything else in there and I certainly wanted to have it if the weather was as cold in Prague as it has been in Bratislava these past few days!

I put the rest of my stuff into the backpack I was keeping at the hostel or the locker I was being permitted to maintain during my absence because it was off-season (and I am so nice).

Sitting at the common room table, I cut into my final supermarket croissant and made a sandwich of the smoked Mackerel I didn’t finish yesterday. I wrapped it up on my ChicoBag SnackTime rePETe sandwich/food keeper. (I haven’t talked about this much but I get a lot of use out of the two that I have been traveling with and for the past few two months I have stashed a lot of croissants in them.)

When finished, I asked the Reception women for help planning my transportation plan.

My transportation plan to Prague 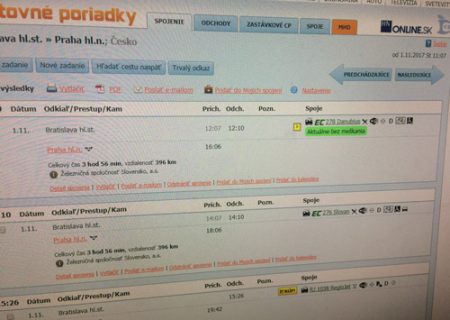 I had a choice between train or bus to get to Prague and I tend to favor train. But the distance between the bus station and my destination hostel in Prague was my deciding point. It is nearly 1 mile closer, 1.5k, from the Prague train station to the Mosaic House Hostel than it would be if I arrived into the Prague bus station.

She looked up the train schedule and status and saw that the train was running on time. Sometimes it is delayed by up to 2 hours, I’d learned from the Hostel Folks staff. A delay would perhaps have had me take the bus.

As it’s a national holiday, trams are on a limited schedule, so she checked the tram as well and found I need to take the 11:35 Tram #1 today in order to make the train. It is 9 minutes to the train station, the final stop. The pressure was on. No relaxed walk, no missing seeing the stop. Luckily, I am familiar with the stop as I have walked past it many times. I only haven’t ridden the tram, as tempting as it was.

Because in Italy bus tickets needed to be purchased from the tobacci shops prior to riding, I asked about this Slovakia tram ticket. She told me to buy the tram ticket from the vending machine at the stop. €.70 for a 15-minute ticket for this 9-minute journey.

The machine gives change. However, I had exact change ready.

I have to admit that as I was figuring out the machine, a local person offered to help so this was really easy for me. I had my ticket in hand several minutes before the tram arrived. 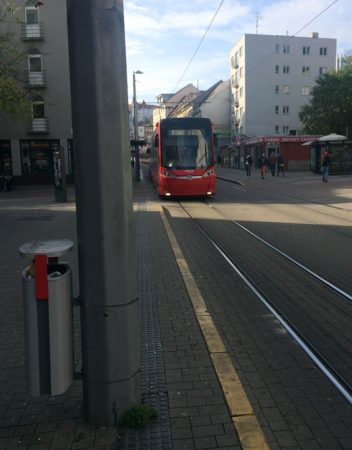 The #1 Tram that took me to the Bratislava train station. 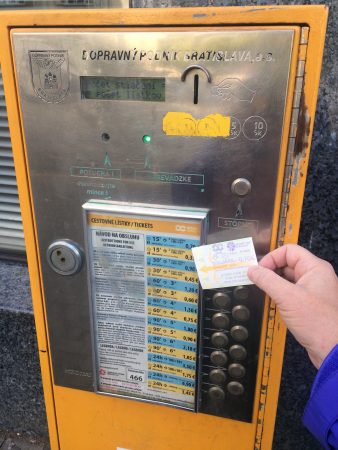 Tram ticket purchased! With a little help from a friendly local.

After validating my ticket, I sat and enjoyed the short ride.
It was easy to know I was at the train station because, among other things, every rider got off. As I stopped to take my traditional photo of me and the tram, I noticed everyone going up the stairs so it was easy to put 2 and 2 together and know the ticket booths were up there. In fact, they were up the stairs and visible as soon as I reached the top.

I had a comfortable 15-20 minutes to buy my train ticket. The line at the ticket windows were 4 or 5 people per line so as I waited I verified with another person in line that I was at a correct window. (It sucks to wait and then find out you’re at the wrong window.)

I paid for the RegioJet train ticket at 11:48. It would depart at 12:05 from Track 1, the ticket agent told me. Signs led the way but were a bit confusing. Luckily I had asked someone to verify that I was, indeed, at Track 1. A college student had heard, so when he and his friends realized that the announcement we were hearing on the PA system was for a track change, he told me and I followed. I do typically listen closely to announcements but I had spaced out or was busy taking a photo so I heard it but didn’t pay attention.

The guys invited me to sit with them in a compartment but I actually wanted to be alone and write or to meet Mr. Terrific if that was meant to be. They also needed to sleep so I politely refused and I went to the regular seats I had noticed in the next car.

Most people were couples and groups. There is power on board, an electrical outlet under the table that’s between the facing seats, so I plugged in my iPhone. Unfortunately, my phone’s Miami airport dysfunction continues and I can’t use it while it is charging so I alternate. The official came through to check our tickets.

The official came through to check our tickets.

At 12:35 an official vendor came through with a cart selling coffee, hot chocolate, beer, sandwiches, and snacks. I bought a coffee, perhaps 12oz, for €2 and as my phone charged, I sipped it slowly and dined on my not-quite-gourmet Mackerel and croissant lunch.

Having noticed earlier that the boy on the other side of the aisle had placed his garbage into a metal container that is built into the train seats, I placed my thin plastic bag of crumbs and creamer and sugar refuse into the one behind me on my right. It contained a discarded bag of chip snacks and two Starbucks coffee cups. I was saddened to see the costly Starbucks craze had hit Slovakia or Czech Republic too. 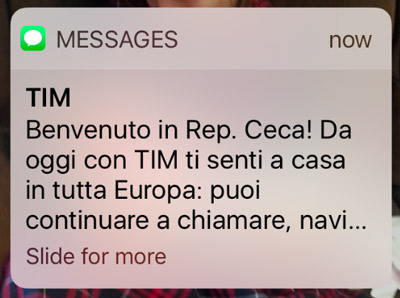 At 12:57, this appeared on my locked screen. Welcome to Czech Republic… I get a notification like this each time I arrive on a new county. So now I have another country I can claim to have been in. The new free-roaming law makes having cell service as you travel within Europe so much easier. My carrier was not 02-CZ and it was a 3G connection. (But remember, I was on a train.)

Here’s the message and translation:

Welcome to the Czech Republic! From today with TIM you feel at home all over Europe: you can continue to call, surf and send sms using your national offer, WITHOUT ADDITIONAL COSTS, in compliance with the policies for the correct use of roaming services in accordance with EU Regulation 2016/2286. For info go to tim.it or call 119 for free. You can top up on tim.it or recharge from Italy. For emergency services, the free number 112 is available. Enjoy your stay at TIM!

Happily, all stations have been well announced in English as well as local languages. Here is some of what I saw from my window. 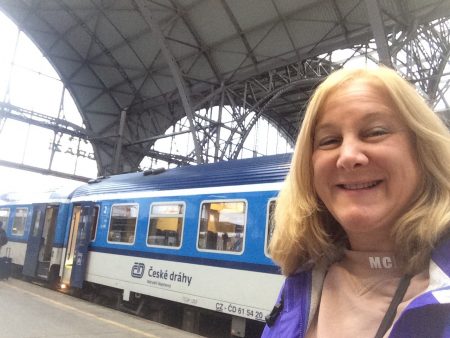 I am in Prague. 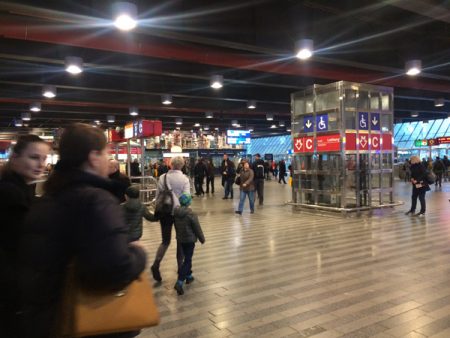 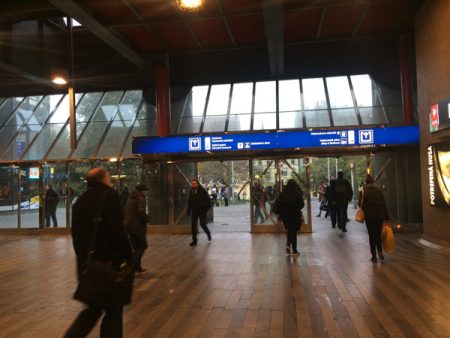 Walking out from the Prague train station to the main street.

Before exiting the train station, I stopped at Tourist Point, which was on my right in this lobby area, to ask about walking through part of the old city as a detour to my hostel. The young girl there gave me great directions, then added (although my mezuzah was hidden) “and if you want to continue a bit further, there is the Jewish section and some very beautiful synagogues.” “But they are museums now, there are no Jews left, right?” I replied. I was correct of course. “I am Jewish,” I added. She said, “in that case, there is another synagogue very close to the station and it is still used on Saturday.”

I am heading to that synagogue. (After a stop in the nice hotel across the street to use the restroom. Paying for the public station toilet wasn’t even an option as they don’t use euros in Czech Republic. They are EU and Schengen but choose to keep their own currency. I commend that, although it is an inconvenience.)

Then depending on my synagogue experience maybe I’ll continue through some of the old city, get some dinner, and continue to my home for the next couple of nights, Mosaic House Hostel.

I found and booked it on Booking.com. I am happy Annaline got me using it. (The Rep actually phoned me last evening to tell me the step I had been missing to get the $20 new customer credit I got because Annaline sent me a referral link.)