The tiny beachfront street that runs through the West End is lined with dive shops and their guest houses, and bars or restaurants. A Thai restaurant offers Pad Thai for over 360L ($17). Pizza, burgers, other things westerners want so they feel at home. But that’s not true Roatan.

Next to the Marine Park office/shop (or call it across from the church) a woman named Mazie sells her home made food. A meal is 120L ($6). If you don’t want to spend $6 she can sell you a half dish. If you want real good true local food find Mazy.

I had her stew Conch (she buys it only from legitimate sources) which was fabulous. I forgot what is in it except for Thyme. I also liked her coconut cake. I saved a piece of that cake for an American named Joe and he commented it was delicious. I also got to taste her Iguana stew but there wasn’t enough left to say how it really was.

She also sells Gifatie shots, Island Viagra. It is a tree bark and then some. Also 3 shots of it kills malaria, really gone. 25L a shot. Bottle is $30 or $20. You can refill the liquid (which I think is alcohol) so the bottle will last you years.

Mazy tells me her family has a few other good tonics too. Old traditional island stuff. One, she tells me, is the thing to take when fertility is an issue, so consider Roatan if you are working in a family.

Mazy also does cooking lessons and she serves a family meal at her home in Sandy Bay just below Lawson Rock. 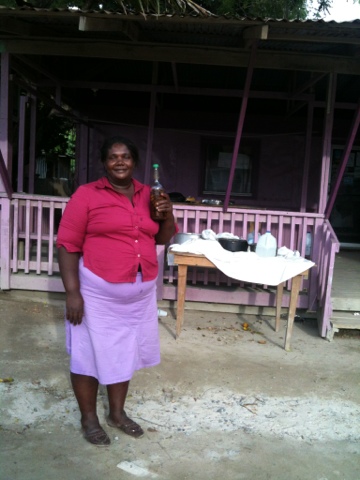