When living out of just one bag, every item matters 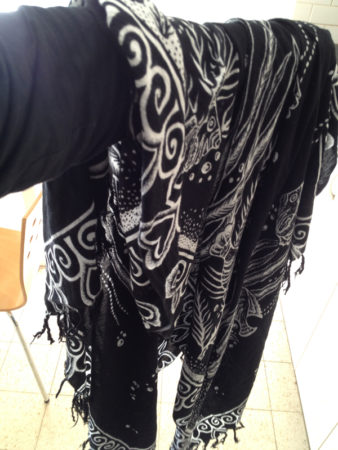 For years, I have had a large black and white sarong that remained in my dresser drawer. I am not a sarong type of gal.
But while packing up my home of many years and giving away my stuff, I recognized the value of this large, thin, fabric garment.

Some of the many uses for a sarong

I don’t look great in a sarong, but…
it turns out I definitely am a sarong type of gal.
And I have a feeling you will be too as you travel just about anywhere for any amount of time.

Men: this will work for you as well.

More of my real-life use

Funny thing: Feb 24, 2017, I watched Shark Tank and saw a supposedly new kind of beach blanket that they claimed could double as a sarong — and was priced at $47! Yet we travelers have long known that sarongs already double as a blanket (and so much more) and doesn’t cost close to that much.
21.006184-89.6033

One thought on “Double Duty Packing – Bring a Sarong”