Tonight is the 7th night of Chanukah and I have yet to even see a latke. :(

Who’d have thought that in Israel, the land of olive oil, there’d be a dearth of luscious lip-licking latkas?

In Poland I could buy them cold in the supermarket or even freshly cooked  hot on the street (at least in Zacaopne). But in Jerusalem on the first two days of Chanukah I couldn’t find them on the street, in the markets, or in the most famous shuk. (Donuts, the other traditional fried food of this fiesta, were all over the place, but for me, latkas are the only satisfying option.) Returning to Tzfat I didn’t see a latka for sale anywhere either.

So I decided to think of it this way…
I travel to learn the world’s traditions, so I’m going with the flow and living on memories of latkas in Tarnow and Zacaopne Poland.

To which my longtime friend replied:
My guess is every household made their own ! As long as you can still buy falafel, I’d be happy!

Ah, falafel… my friends have been laughing along with me at my living-on-falafel-in-Israel trend. And I realized and replied:
Falafel is fried! So I’ve been doing the Chanukah mitzvah ever since I arrived in Israel! Thanks

So all was right with the world as I continued to light Chanukah candles nightly and give in to my lack of latkas.

And then on the last night… 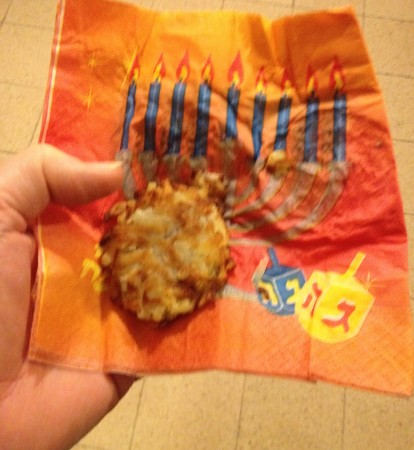 My Chanukah latka! In a Chanukah napkin, of course.

Two women who were staying at Ascent, called to me and said, Deborah, we have something for you… and handed me this!

They’d been in town and smelled latkas cooking so they’d approached the home and asked the woman making them — a total stranger! — for one for me!

Moments after I posted my latka, LA friend Fran posted:
Finally, a latka!

Boy, did I savor that latka!