When I visited my long-time British friend Derry in his hometown in England, I loved being a part of his everyday life, which included Pub life. Quiz night at one pub, darts at another, cribbage at another. The pub’s Quiz Master even put in a round of American stuff in my honor. Some months later, Derry came to Los Angeles as he’d planned, and I was in LA as I’d originally not planned, so I had the honor of hosting him too. Little did I know that we’d land up in a British Pub for Quiz Night — in Los Angeles!

I’ve loved neighborhood pubs in England and Ireland when I lived or visited there. However, no bar I’ve ever been to in my small college town, or in my 20s in NYC, or in any other place in NY or LA ever had the feeling of any UK neighborhood pub. 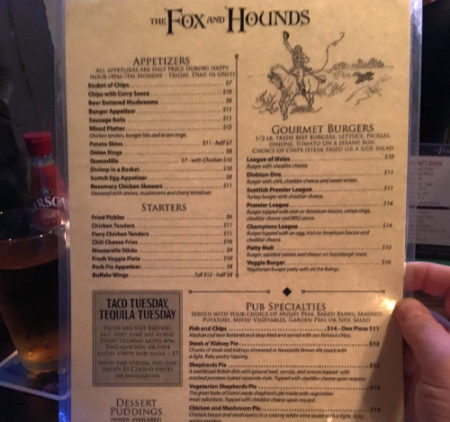 I wouldn’t typically have entered even a British style pub in Los Angeles. However, Derry’s long-time friend from England told him about The Fox and Hounds, “a proper British pub.”

When Derry checked its website’s events page, he saw that it had, of all things, a Quiz Night. That clinched our decision.

On a Wednesday evening, we drove the fabulous twists of Laurel Canyon, one of my favorite LA drives.

The Fox and Hounds in Studio City, CA

I realized I’ve driven past this pub many times. It’s not large looking and not at all fancy looking on the outside. Not a bar-type, I don’t know if I’d ever have come in by myself, but now that I’ve been there, I’ll be bringing friends there for sure.

We arrived at about 7:45 as the quiz was called for 8. I was happy to get the last space in the parking lot behind the pub. It’s nice to be able to park easily in LA. The next car that pulled up parked right nearby on the neighborhood street. Being after 7, I think there was plenty of open and free parking on Ventura Blvd.

We walked alongside the pub to the front and were both bewildered by lack of what appeared to be a front door! Then I tried pushing a small door that definitely didn’t seem like a pub’s front door and was happy to see a long bar a bit to the right, darts straight ahead, and a dining room to the right.

We took seats at the far end of the bar. Folks behind us played darts. In the dining room area, a few tables were surrounded by groups of people.

The bartender was a very nice blond woman. Just like the bar keeps I’d met in my travels through England, she didn’t mind when I told her I wasn’t a beer drinker. I asked if she had cider. The had two in bottles and one on tap. She recommended a bottle, blackberry or such. I found it too sweet for my liking (but drank it anyway, of course).

Later she asked if I’d like another. I asked what the on-tap choice — 2 Towns Cider — was like and could I try a taste. She obliged and I liked that one. I was driving us home later and am not a big drinker. I was thinking I’d likely not finish a pint. She suggested a half, which was perfect for me.

Derry enjoyed his beer on tap. I enjoyed my cider. Just like my autumn in England. ($7/pint by the way.) Here’s their Beer list.

She didn’t seem to mind when we told her we’d like to order and eat after our meal after the quiz so we could focus on the quiz, then focus on the food. In case you’re curious, that turned out to be around 10.

In Bewdley where I joined Derry’s Quiz Night, the Quiz Master and questions are at/on the TV screen and we answered by buzzing in on a tablet. Maybe this is why we opted for bar stools close to the TV.

As the hour approached, every bar stool and table filled up. At 8:10 we asked the bartender about the quiz. He doesn’t tend to get there until about 8:15 she said. Soon after, the quiz started.

For the quiz here, each team is given a piece of paper for each round and we write our answers. After plenty of time to think and write down our answers, a team member, Derry in our case, handed in that round’s paper. I liked this much better than the pressure of having to buzz in before the other teams. We had more time to think, or to laugh at how we thought we had no idea of the topic but then pulled answers (often correct) from our brains.

At each round, the scores were called out. There were perhaps 15 teams playing! I love that it’s so popular here.

A lone man sitting next to my friend became our third teammate as they chatted. Just like would happen to me if I was in England.

We enjoyed each round and although we didn’t get the highest score, I was impressed by how much more I knew that I first thought. The funniest round was having to name Game of Thrones actors. I’ve never seen the show so I was useless. Derry hasn’t seen it much, but the actors are British and some of the locations are not so far from him. I watched him in amazement as he proceeded to get them all right, except just one. He’d debated between two actors and it was the other one. I was impressed.

Oh, and one round was that a member of each team had a challenge elimination game. It was something about tossing something. No surprise to me, Derry won. A free drink for each teammate.

Dinner at The Fox and Hounds

Looking over the menu, I had a difficult time choosing what to order. There were several things I wanted. I’d look at it again and again as the evening progressed.

I kept coming back to the Steak n’ Ale Pie, ($13):
Chunks of steak simmered in Newcastle Brown Ale sauce with a light, flaky pastry topping.

It sounded so good.

In England, I didn’t always love the meat pies I’d tried. Often they had too much pastry and the pastry tasted a bit undercooked for my liking, sort of too pasty.

The moment the waiter set my Steak n’ Ale Pie on the bar in front of me, I knew it was going to be as described. It really is light and flaky as described on the menu! I love it!

I also enjoyed my side of Mashed Potatoes. The other choices were Mushy Peas (a British thing), Baked Beans, Mixed Vegetables, Garden Peas or Side Salad.

Would he like it, I wondered. This is California, not England. He said it was as good as he’d have at home in any of the pubs he frequents. That’s saying a lot because I know he makes a mean Steak n’ Ale Pie himself and goes through many steps to make it.

The Fox and Hounds is a great place to go for real British Pub Food.
I’m glad we ate after the quiz so we could savor our pies properly.

So this Los Angeles-located British Pub is sometimes a bit pricier than the small-town pubs in England, but not by much. (London would be the same as or more expensive than this pub.)

If you’re curious to see what other people say, here’s the full TripAdvisor listing and here is my own review at TripAdvisor. 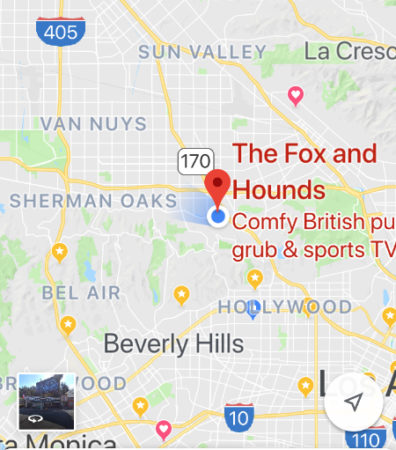