On this rainy Sunday, Michal and Joanna took me to the Warsaw Uprising Museum in the part of Warsaw called Wola. We drove as it was our only stop — and because it was raining, of course.

Our drive to Wola for the Uprising Museum

If you’re curious about some of the roads in Warsaw, here’s our drive from his suburb to Wola. 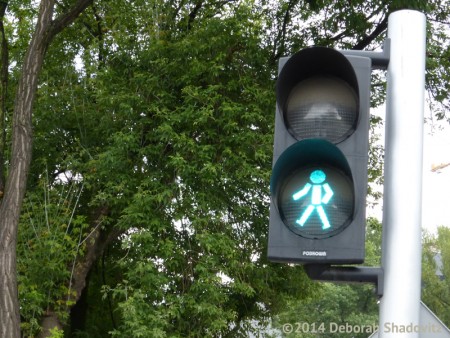 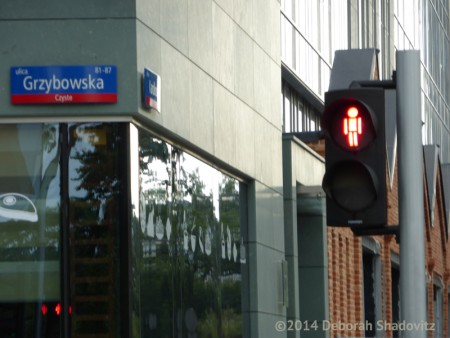 I love seeing the different walk and don’t walk signs in each country. 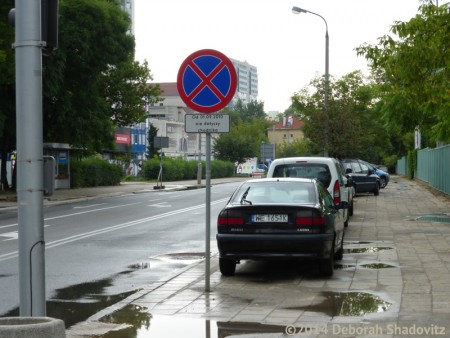 How cars park in Poland. This, by the Warsaw Uprising Museum.

In case you’re curious, here is how cars park in Warsaw, and throughout Poland.

They pull up on what an American would consider to be the sidewalk. They park as close to the curb as possible; just on the other side of that curb from what we’d be doing. And they must leave room for people to walk.

Our car is one that is pulled in, behind the parallel parked cars here. It’s where we parked to go to the museum.

A bit about Warsaw drivers: I heard that 20 years ago when Russia left and people were able to go to Western Europe and buy cars, they came back here and drove with an attitude: I have a fancy car and can do what I want now. But now they have learned to be polite to other drivers and share the road.

And now, into the Warsaw Uprising Museum

We opted for the self-guided audio to learn as we approached and viewed each exhibit. We were there for nearly four hours, about three looking at the exhibits. There is a lot to take in. The battle to try to hold onto life in the face of the Nazis was a difficult one.

I can show you photos of the museum, but can’t even begin to tell you about its impact.

We found ourselves emotionally exhausted. My Polish-born hosts already know the story and times, but it was still a lot for them. As an American-born Jew, an internal battle started this day, remained with me throughout my time in Poland, and is still with me. I don’t think it is possible to learn the Polish story here and not sympathize. But then I remember that my fellow Jews suffered all this and more.

The period-style coffee shop provided a nice rest. There, I tried a traditional Polish cake. (It was ok, but not the best, Michal said.)

Want to know more? Here’s the Wikipedia article about the Warsaw Uprising Museum.

One thing I started to realize more fully as I was here is that for hundreds of years, Poland was mostly occupied. Austrian-Hungarian Empire, Nazi, Russia. Their eastern and western borders were always changing. They have had their own government and freedoms only since 1989. Well, some of Poland. The eastern part is no longer Poland, but Belarus now. Days later, in Lithuania, I saw the same ever-changing borders. I think that, as Americans, we don’t fully realize this.I’m also told that currently, anyone born before 1989 remembers waiting on long lines with a ration card to get just one kind of food, having a chicken to have eggs or trading what they could raise farm or otherwise create with neighbors for goods. Freedom and goods are appreciated here.