Are you wondering arriving in Vilnius, Lithuania and getting to a great hostel or hotel for your stay there? You’re in luck because both the bus station and train station — right across from each other — are easily walkable to the beautiful old city of Vilnius, where there are several options for accommodations.

I’ve mapped the walk from the bus station to Hostelgate Backpackers, the very nice hostel I stayed at because there are several hotels just a bit further inside the city gate from there. Hostelgate also has Hostelgate Private Rooms, a separate building a few blocks away. And there are some very nice hotels nearby as well. Plus, at least one other hostel I have not been into.

When you take the lower walk parallel to the train tracks, you enter the old city through the Gate of Dawn.  But no matter how you get the old city, you’re bound to visit that historic gate — at least if you’re into visiting historic Christian churches. (Here is why.)

When I was in Vilnius, the trains didn’t run many places and, I was told, wasn’t very fast or reliable, but that may have changed. I arrived by bus as I was coming directly from Warsaw, Poland and wrote about that ride so you can see the nice bus.

Upon arrival, I walked sort of north. A few days later (having taken a bus to another part of town to visit the Archives, I walked from the bus station along the road where the train runs. That’s when I took these photos. As you can see, the train is well hidden behind trees, making it much nicer for the people of Vilnius.

Here you are seeing is the Vilnius train station. I took this photo from the sidewalk outside of the bus station. Panorama photos such as this tend to make straight streets appear curved but this street actually is curved. The bus and train stations happen to be on an oval with traffic going one way.

The Vilnius train station as seen from in front of the bus station. 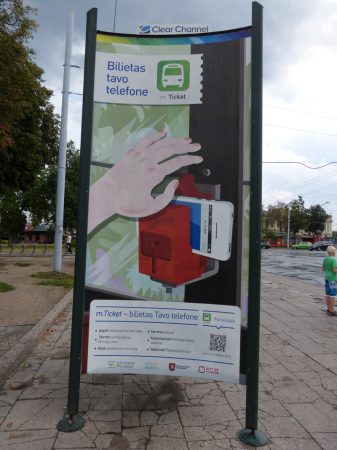 At least eight bus stops dot the oval street, enabling people to arrive at, or leave from, the buses or trains from all over.

It’s showing that people can purchase their bus tickets — local bus tickets — online and have them handy on their phone. (What I didn’t know from the photo or from figuring it out, I could learn by using the Google Translate app. Google bought that technology several years ago.)

And behind this bus stop, also just outside the bus station or across the street from the train station is…
a city area bike rental station. 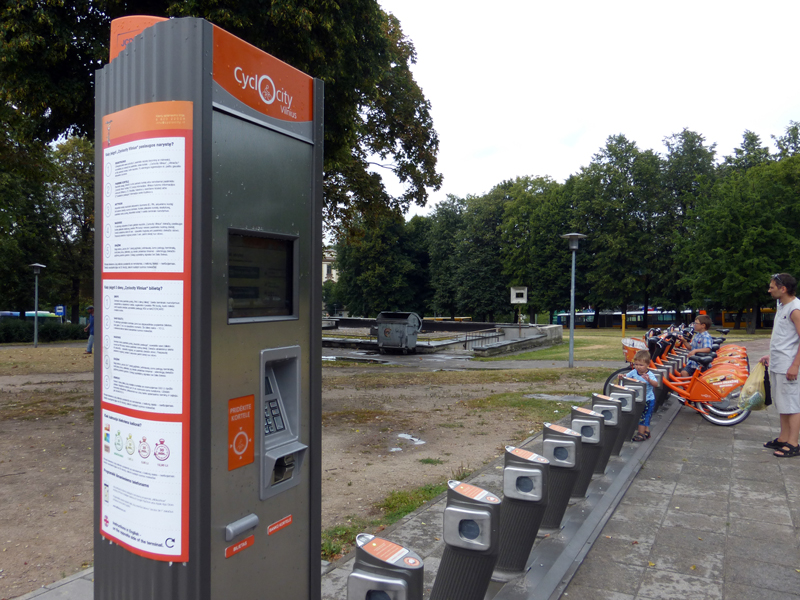 Around this park area where the bike rental is, there are some shops where you can stop for some food or beverage. 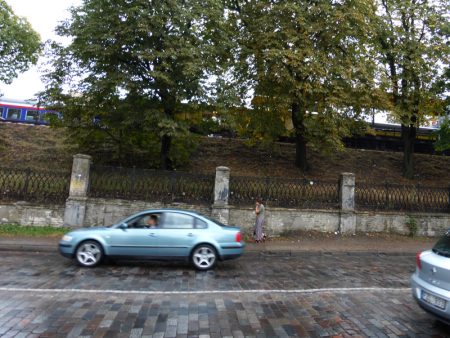 Walking along the street toward the Gate of Dawn which will be on the left. The train is running to my right.

And if you turn back to look, you can see the park area and the street that turns to the north and into the historic old city that way.

Remember, if you arrive in Vilnius by bus or train and you’re traveling with an unlocked phone, this is a good place to seek a SIM card and cellular plan. 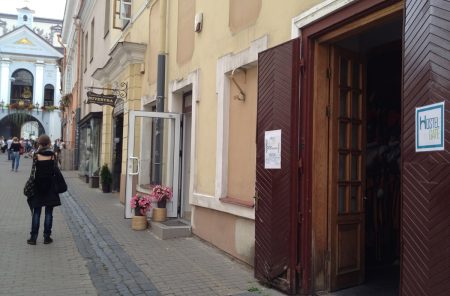 Unfortunately, I can’t find or didn’t take any photos of the Gate of Dawn. But here is a photo of the gate and the mapped hostel from the inside of the gate.