While traveling we sometimes have to coordinate between wherever we are and something back home. Whether it’s wishing a happy birthday, paying a bill, or doing something for your client as you travel, the timing can be confusing. Here are some ways for MacOS and iOS users to make that all easier.

I could start by telling you about the solution Siri provides, and of its fails. But this first solution is reliable and easy and more flexible than Siri, so with thanks to its developers, I’m leading with it. Keep reading though, to see what Siri might do for you.

Oh, after I named this, I’ve added to it so it should be three apps or more.

Coordinating times with synchronize for iOS

Sometimes we get to choose what time something will happen. We can tell someone, “I’ll phone you at 1:00 your time,” knowing the time in your own time zone works for you as well.
Great, if you are good at figuring out the times.
More difficult when there’s yet another time zone involved.

And then there are the times when you’re told “Call me at 6:30” and you’ve got to figure out what time it’ll be wherever you are at that time.

Several years ago I found the greatest app to make figuring that out a lot easier — but I awaited a version update before sharing it here.
The app is called synchronize.
It’s by Solv LLC and it’s for Apple iOS. Oh, and its free — although worth paying for.

It’s even helpful when you’re trying to watch your favorite game live on TV (if you also have a VPN that’ll let you see that game). 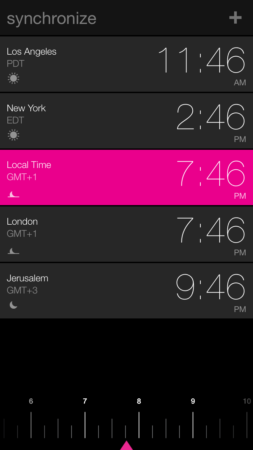 Here’s an overview of how synchronize works.

Each time you launch synchronize, you’ll see your own time, the Local Time, highlighted.
It’ll be bright pink and you’ll know all of the other times you need as well.

In this screen shot, I am in London, so the Local Time pre-selected is that of London. However, I’d already added London to my list so for this reason you see it listed and see it duplicates my Local Time. 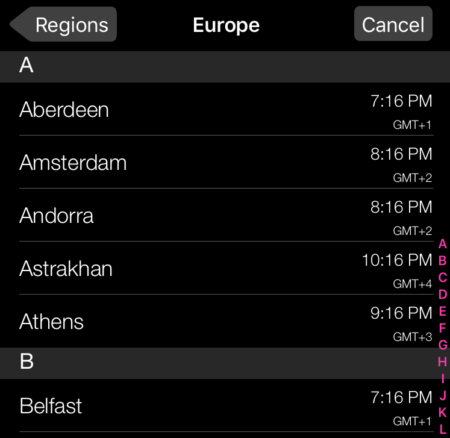 Of course, the app can’t know which times matter to you, so you get to choose which locations show on the screen. To do that, tap the + at the top right of your screen. That will take you to this screen where you choose a new location that concerns you.

I clicked Europe in the list and scrolled for Rotterdam but since they don’t list Rotterdam I will tap Amsterdam to select it because I now know will be in the same time zone.

Tapping the desired location will bring you back to the home screen but with the new location highlighted. 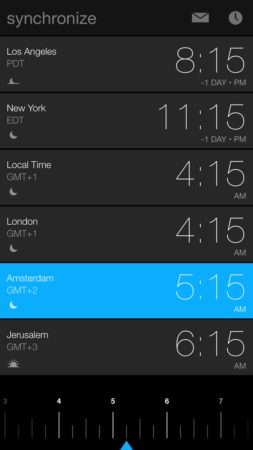 Slide the bottom to see times above

Now for the handy part…

Let’s say someone needs you call or do something for them at 5:15am Amsterdam time.
Tap Amsterdam.
Then, slide the slider below. You’ll notice Amsterdam’s color change to a clear blue. This lets you know that you’re no longer seeing the actual current time.
As you slide left or right between midnight, noon, and midnight you’ll notice all of the times change. You’re seeing the corresponding times!

To see the current times again, click the Clock icon at the top.

Wondering what the envelope icon is? That’s to send an email to the people involved! It’ll tell them all the times on your screen. You can edit that email however you’d like and send it so everyone is aware of the appointment times.

When you leave a place and no longer need its time on your screen, tap that location on the home screen, then just tap the trash can icon that will appear at the top.

This app is so handy for so much communications-wise that it lives on my first iPhone screen while I’m traveling.

Can Apple’s iOS Clock do that?

I love built-in World Clock feature. Hiding in the Clock, it enables you to add a clock for each location of interest and clearly know what time it is. I’m looking at it now as I write this and I know that Los Angeles is 1:05pm, “Today, -8HRS.” However, it only shows you the current time in those locations.  It lacks a way for you to see what time it’ll be anywhere at some other time of day or night.

Tell Siri to set a Reminder or a Calendar event

If you’re using an iPhone (or iPad) Reminders can help — but there doesn’t seem to be any timezone support so you may think you’re on your own. No worries. Siri can help. Rather than figure out the time you need to list, ask Siri to do it for you.

Recently, I had something I needed to do for someone back in LA.

When she asked what do you want it to say or such, I replied:
“Turn off party registration” 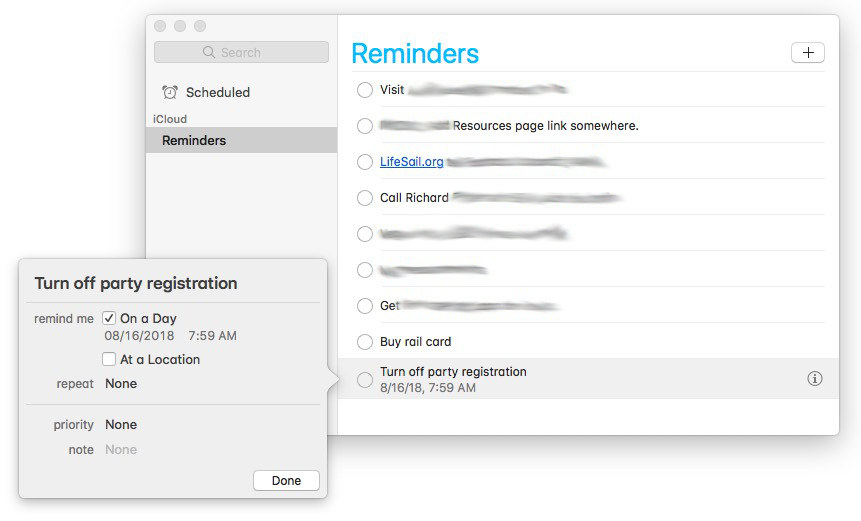 I clicked its little “i” and looked for a time zone but there is none shown. Yet, Siri did it.
Although I love synchronize, I do love that I no longer have to calculate the timings of work events.

Siri can do it for me — or be my double-check.
This works on both MacOS and iOS.

Note: You may have to turn on time zone support. Mine’s been on and I don’t want to turn it off to test. If this doesn’t work, try setting the Calendar’s support as I show in the callout below. 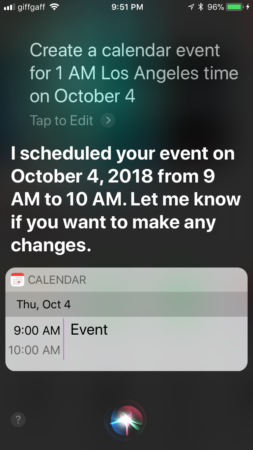 It’s also helpful to have events marked on your Calendar.
Siri’s good at that too.
(iPhone running iOS 11.2.6.)

I asked this in England where the time is 8 hours ahead of Los Angeles.

Set the Calendar yourself 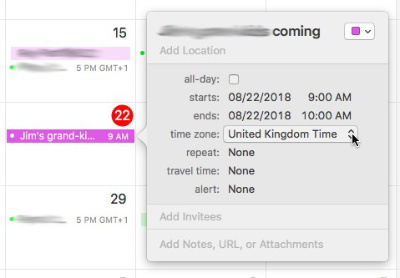 You can also set the Calendar yourself.

This has been an ability for many years.

For this, you’ll need to go to your Calendar->Preferences and check the box for: turn on time zone support.
It’s a good idea to have that on the entire time you’re traveling — and if you ever make appointments with people in other time zones. You can easily tell it’s on because you’ll see the time zone at the top right of your calendar.

With time zone support on, simply set the event as always.
Then select the desired time zone. The event may move forward or backward a day so it corresponds properly.
In this example, it’s a local event so I left the zone as UK. However, if I needed to match the California time, I’d choose Pacific time. 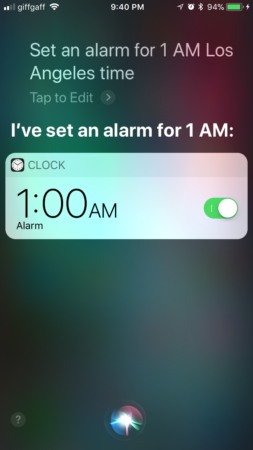 Reminders and Calendar events  don’t wake you up or summon you the way an alarm does, so I tried asking Siri to set my alarm based on another time zone — and unfortunately, it failed.

As you can see, I told Siri: Set an alarm for 1 am Los Angeles time.

It should have set the alarm for 9am as I am 8 hours ahead in England as I ask. However, it ignored that part of my request.

This would have been my favorite.
(I’ve slept through Reminders twice this month.)

For those wondering, I do have Los Angeles as a World Clock on this iPhone. It didn’t help.

I was also sure that if I asked Siri, he/she would tell me an adjusted time. I’ll let the results speak for themselves. Again, these are both from iPhone on iOS 11.2.6. 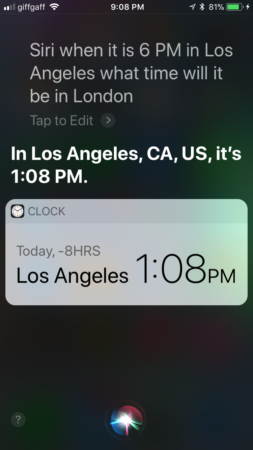 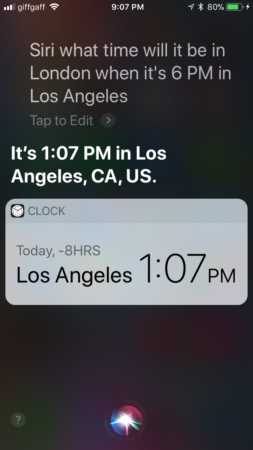 I hope these make your life easier whether you’re trying to keep up with the office back home or are a “Digial Nomad” or simply don’t want your friends to hate you for calling in the middle of the night, while driving a carpool, or while at the office.