Yesterday I traveled from Krakow back to Warsaw by PolskiBus to enjoy the company and hospitality of Michal and Joanna — and to leave a good deal of the contents of my backpack there while I travel north. Now I was en route on SimpleBus from Warsaw to Vilnius, Lithuania. Again, Michal delivered me directly to the bus. 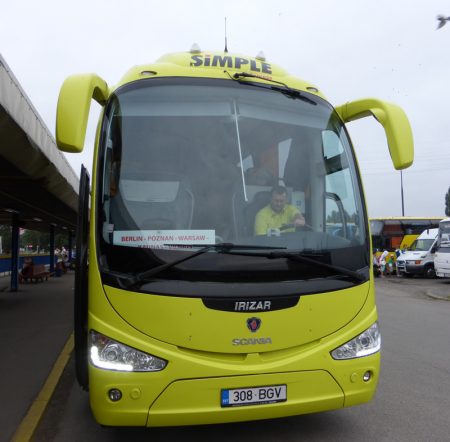 SimpleBus from Berlin to Vilnius, where I embark at Warszawa Zachodnia Station

Vilnius is actually on the furthest end of Lithuania and I somewhat passed by places I might have wanted to stop, but with family heritage named as Vilnius, I decided to start my time in Lithuania there. (I’d stop elsewhere afterward.)

My bus left Warsaw’s Warszawa Zachodnia Station at 6:20. We are due to arrive in Vilnius at 3:45, traffic depending.

Almost immediately, thanks to the onboard wi-fi, I received an email response from a family member. I had written asking what he knew of my Lithuanian family. I put this info with what I know, composed and sent an email to the woman at the Lithuania Archives. I was excited to think that I might learn more about this quarter of my family as I visited the places they were from.

8:15am
I am comfortably seated on SimpleBus, as our driver makes his way over a mostly (so far) two-lane road through green countryside. At one point we were surrounded by trees and I imagined how my fellow Jews hid out there once. (As much as I can be in the moment enjoying a place, that past is never fully out of my mind.)

Now, as we near a town called Lomza, we are going through open farm fields sometimes separated by clusters of trees. Sometimes there is a row or two of tall trees separating the farm and home from the road. I think I see corn growing. I just took a bunch of photos but missed a photo of the nice Welcome to Lomza sign.

Here’s a series of photos taken within a 4 minute period: 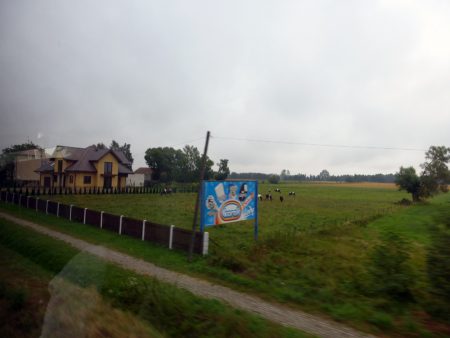 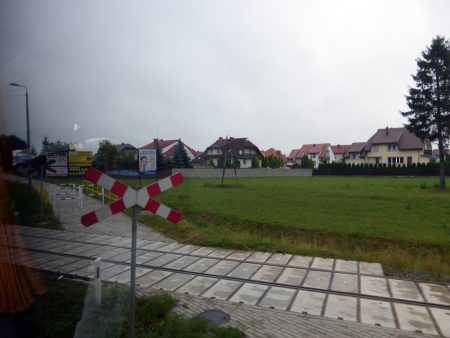 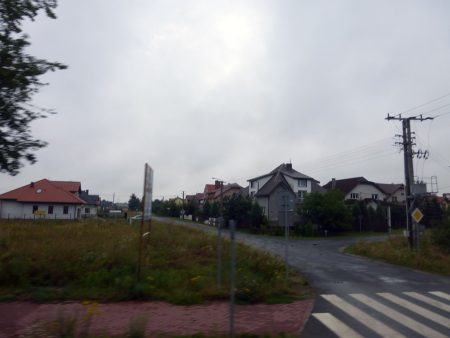 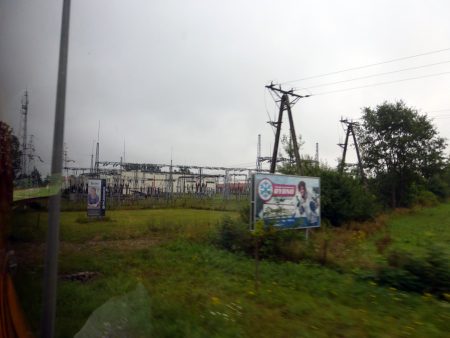 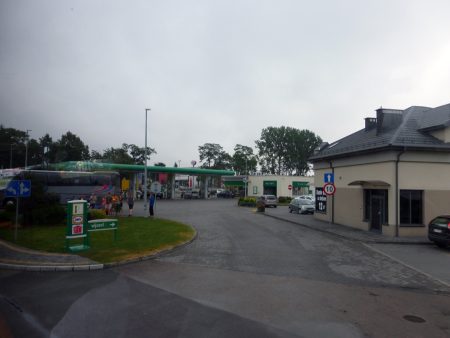 If I showed you these photos and didn’t include the signs would you think this the USA?

We are working our way through Lomza. I took photos of road repair. 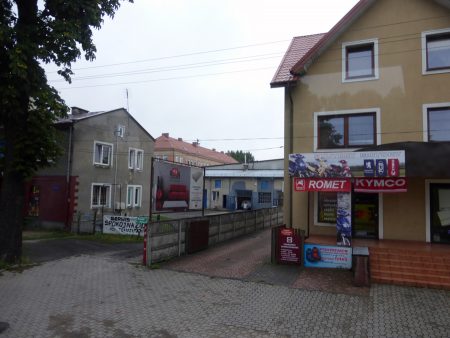 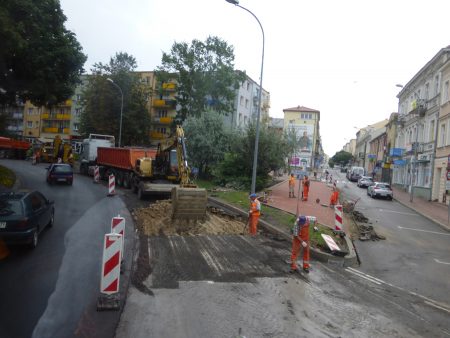 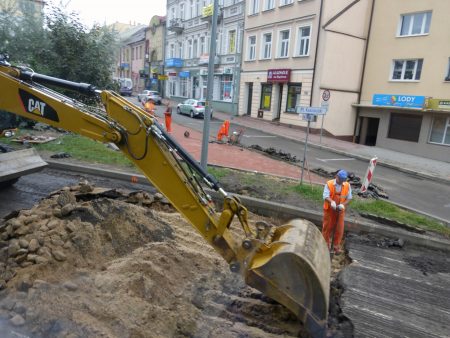 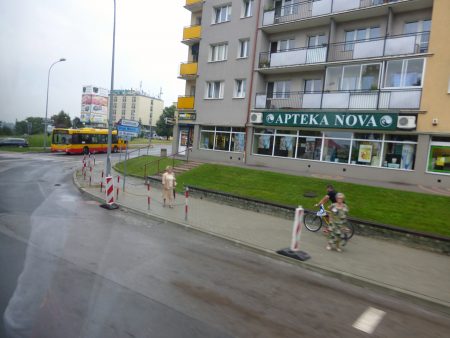 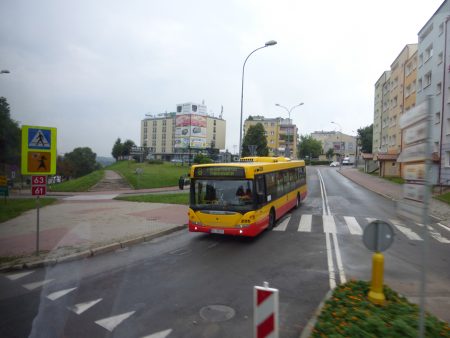 Then we had a river to our right and I would have liked to stop and walk around this town. Now we are crossing that river.

8:37
We seem to be out of Lomza. My eyes are closing. The air is still on the bus. The bus is very quiet except for the stains of Abba, a CD, flavoring the air. The few who have spoken on cell phones have done so very quietly.

I went to sleep close to 1 am last night, I think. I have the benefit of being able to sleep on the bus but poor Michal can’t. I need to sleep now.

10:26am
After sleeping for a while, I woke and ate the second of the two sandwiches Michal had made for me. 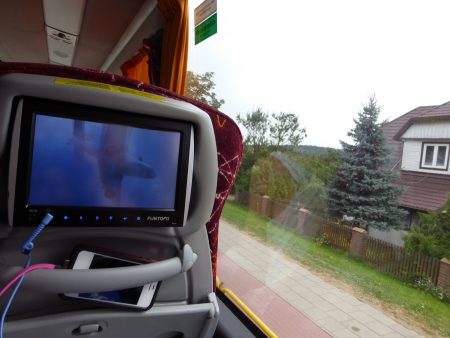 Watching movie and scenery with my comfy seat back. iPhone (always an older model) in my NewerTech case with my  FAB Urbanears Medis earpieces charging and ready when needed.

Now I am watching Planes on my seat back Funtogo entertainment screen. There were many choices. This is an excellent bus.

A man is next to me in the aisle seat. He is nice and speaks English.

Anyway, I haven’t seen the Pixar movie Planes yet so I am enjoying it.

11:08
We just went through a time zone. One hour forward.
My phone no longer says PLAY – my service of Poland. It says LT BITE GSM

1:26
The bus in Garliava, in Kaunas County, Lithuania on route 130 heading north. The sky is blue now. 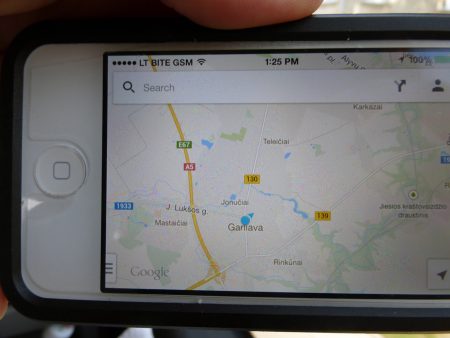 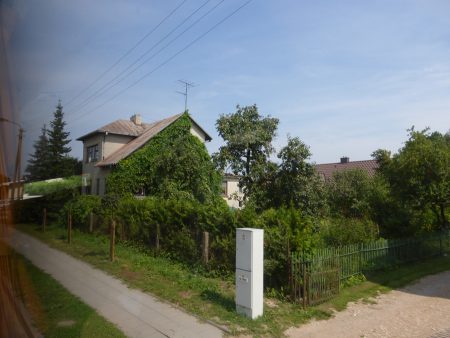 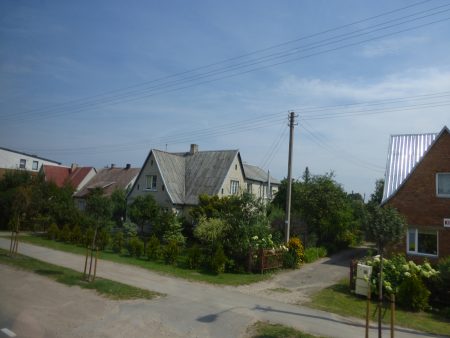 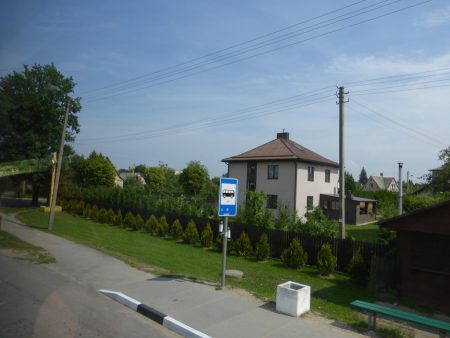 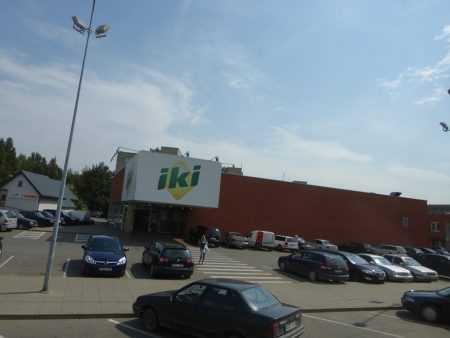 My first view of an IKI supermarket. Along route 130 through Garliava, Lithuania

I’d met Pedro a few days earlier in the bus to Warsaw from Krakow. He was going all the way to Vilnius to visit his girlfriend, while I made the stop at Michel’s to change out some of my stuff and continued onward a day later.

I replied to Pedro and he texted:
“Ok ok…I am on my way to the station…see you there at the entrance.”
He asked if I found a CouchSurfing host. I hadn’t had any luck and asked if he knew hostels. He said there are at least four and he would help. It is so amazing to land somewhere and not go it alone. (First Michal in Warsaw, then Dorota in Krakow, and now Pedro in Vilnius. This was a very different trip for me!)

(First Michal in Warsaw, then Dorota in Krakow, and now Pedro in Vilnius. This was a very different trip for me!)

2:37
I met a couple of young women on this bus. One is from Riga (Latvia) and is going there now but just for a wedding. She lives in Germany now and lived in London before that.

I am watching Frozen, which I saw before when house-sitting but loved.

The bus stopped in Kaunas (Lithuania) for 10 minutes. The Riga girl and I were in a shop getting food when I looked out at the bus and realized it was driving away! I ran out and waved to the driver. Good thing he saw me! He gave me mock stern look and tapped his wrist – but he stopped and opened the door for us. :)

The Riga girl and talked a while but each had a movie we wanted to finish.

3:00
Around the time we stopped at the airport to swap passengers, Frozen (my movie) ended. I looked up at the scenery again. And…saw water on the bus windshield. It was perfectly beautiful all day and just as we are coming into town, it is raining.

Soon, it was time to text Pedro again, but the wi-fi was off. I stepped to the front and asked the drivers. They’d turned it off as we were close. But they offered to turn it on again for me to send my final text to Pedro and receive his reply that he was on his way. They turned the wi-fi off again. 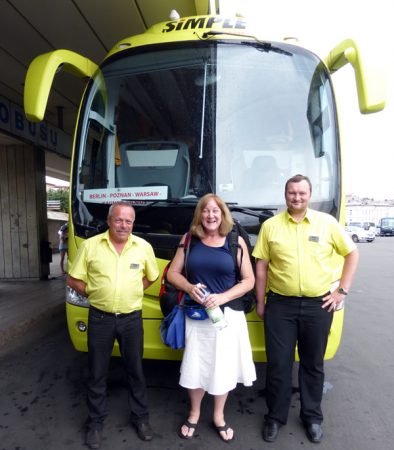 At the Vilnius bus station, all set with my backpack, daypack, etc as my bus drivers honor me with a photo.

When the bus pulled into the Vilnius Coach Station, Pedro was waiting for me.

He did me the favor of taking this photo of me and the very nice bus drivers.

It was fabulous to be met by a friend. (Technically an acquaintance, but in travels like this, I consider such a nice guy a friend.)

It’s not fun getting out of a bus, donning a backpack and walking through a city in the rain to find accommodations. But I don’t recall the rain being a bother. I was in Vilnius, Lithuania — a place I’d never thought I’d get to in my life. What would I find here, in the city (or area) of my family’s past generations?

A sidenote: It feels a bit odd writing this but I realized maybe I should be pointing something out. If you are 40 or 50-something etc have been fearing that solo travel will be lonely because there maybe aren’t so many solo travelers your own age on the road, I’d like to note that Michal and Joanna (my 3-time hosts in Warsaw) and Pedro (whom I introduce here) are all younger than me. Yet, each reached out to me. In fact, during my stay in Vilnius, all the people I talked with at the hostel or went to dinner or sight-seeing with were under or around 30. Because everyone brings their culture, viewpoint, and knowledge to a conversation, I never felt old or too old to be in the conversation. I just want you to remember this and not let your age, whatever your age, stop you from traveling independently.