Skip to content
Home » All of Deb’s tales of travel and tech » Deb's Travels » Deb in Mexico » Grand Cenote, Tulume

Today’s plan: travel from Playa del Carmen to Tulum. Enjoy the Grand Cenote. Travel on to Chetamal, a town at the southern boarder, close to Belize. I am making my way to Belize, Honduras, and the sailboat.

I write this on my iPad’s built-in keyboard at 8:34pm on a dark bus from Tulum to Chetamal. For the 1st time on this trip, I am not alone as the only English speaker on the bus. Jessie, with whom I took the hour-long comfy Collectivo from Playa del Carmen to Tulum (40 pesos, but locals may have paid only 20) sits beside me, resting. (He will likely travel with me at least into Belize.)

We left the Happy Gecko hostel/hotel around 11am. The plan was to leave around 10 but heck, we’re traveller’s and not tight on any schedule. I’d gone to bed around 1am and woken up for good at 9:30, never expecting to sleep so late. But sleep is always odd in a hostel, and in Playa on Easter Week, people were coming and going from the dorm at all hours, so sleep is not solid. For the first time in my month away, I actually had a great protein breakfast soon after waking, thanks to the rabbi’s wife. After lunch yesterday, she gave me several pieces of but-encrusted chicken fillets.

It as around noon when we arrived in Tulum. Jesse was really wanting coffee, eggs and toast. The Collectivo let us out right as a nice-looking restaurant with sidewalk tables and it was inviting. Jesse was pleasantly surprised that his eggs actually came with toast – an uncommon experience for him. As I’d eaten, I enjoyed a coffee (no refills though) and an appetizer of fresh guacamole and chips. (The chips are not leavened bread so they are my travel adaption for Passover.)

As we awaited our meal, I heard English spoken by a wet-suit clad man two tables away. Jesse and I both needed snorkel gear and we wanted it in time to use it in the Grand Cenote so I asked if he sold gear. He didn’t but a shop just a few doors down did. (Shortly after breakfast and 551 pesos later we both had a mask I find comfortable and a snorkel that doesn’t allow water into the top and clears from the bottom. No fins there. Maybe later.) The man was also able to tell us about the Grand Cenote and that it was the best of the 5 or soil the area. Stopping into the hostel conveniently located between the restaurant and swim gear store, I learned the ADO station was en route to the Cenote and had lockers large enough for our backpacks. (It did. This is great for every traveler to know.)

We walked a few blocks, got to ADO, bought tickets for the last bus to Chetamal (204 pesos) and continued down the road. A while later we realized we had not seen lockers and were still carrying our heavy packs. Back to the station…. This time we locked our bags. 40 or 50 pesos covered us for the afternoon and we each had our own key to our own locker. It was nice to be load-free again.

The instructions I was given was to walk 7 blocks to the traffic light. It seemed we walked at least that. Had we missed noticing the light as we were engrossed in conversation? We were directed back 2 blocks. That wasn’t right either. So… about an hour later we were finally clear on where the Grand Cenote is, and we’re on our way by cab. (A best 60 pesos investment.) We both wondered how people in town, where tourists come, eat, shop, ask, don’t know this Cenote. 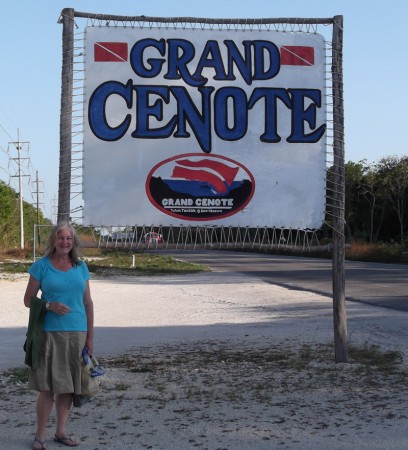 The Grand Cenote of Tulum

We arrived at the Grand Cenote at 4:30 giving us 1 1/2 hours there. We paid our 100 pesos admission fee, changed into swim suits in the clean changing rooms, and walked down the wooden stairs to a wooden deck that went off in several directions. (I was happy to notice a sign that said do not wear sunscreen in the Cenote. They are keeping it pure.) The water was clear, pristine, blue. We could see some of they bottom. 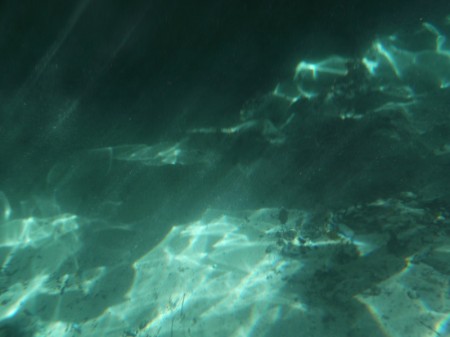 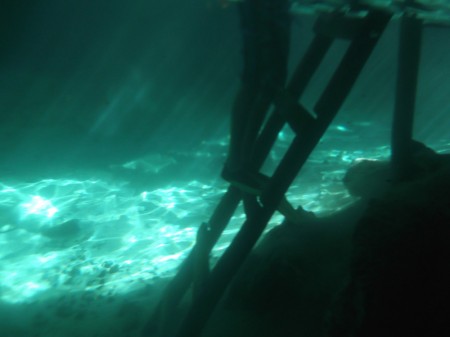 The ladder, but this is someone else.

Some guys advised us to jump in. Jesse did.

I took the supposedly slightly torturous route down the wooden ladder.

The water was cool, but I am getting used to cold water from my showers. It was easy to go to my waist, splash a bit onto my arms and face, then swim in.

What a rush it was to put my face into the water for the first time and watch Jesse swim deep below me, heading into the cave that was in front of us!

I immediately wanted my underwater cameras! (I still hate that they were stolen.) So after swimming around a bit, I got out, put my last surviving camera into my Sea To Summit document bag and climbed back into the Cenote with my fingers closed tightly around the bag’s closure as an extra measure.

Moments later…
a turtle swam right by me!
Slowly, it came so close!
It took me a moment to realize what I was seeing.
A turtle!
In the water, right by me! Amazing!
And I had the camera.
I got one photo and then I followed it until it turned and dove. I was tempted to do the same but the camera bag is really a document bag and not meant for full submersion and I had not yet practiced going under the water with the snorkel. Later I heard people telling one another they’d heard there was a turtle in the water. Yep, there was. :) (This photo is fully underwater: turtle and camera.)

A turtle came into the Cenote right in front of me!

It felt so great to explore the Cenote, to watch the fish, to see the lettuce-like plants, to enjoy the play of light upon the water, the caves, the stalactites, the roots of the huge mangrove trees…. (I have not verified the trees re mangrove and they look very different than the ones I saw in northern Australia, but I had been told there were mangroves in the Yucatan.) Some of the water’s bottom has soft white sand that was nice to walk on, too.

Eventually I saw Jesse again. He’d been into a cave and seen bats. I followed him there. Beautiful lighting. (I did not see bats, or dive.)

Jesse commented later that we were probably there ate the best time of the day. No crowds. Beautiful light. I agreed.

We exited the Cenote park back in our dry clothes and noticed our cab drive away with other passengers. Jesse caught his eye so we knew he would return for us. Not too long later, we were back at ADO and had exchanged our late night bus tickets for the 7:50 bus. We had time for dinner and selected a Vietnamese restaurant. At 135 pesos for as meal that contained seafood, it was my most costly (by far) on this trip, but really, it’s $11. I enjoyed the moment, and that I had great company with whom I could share a real meal.

And that brings us back to the ADO bus, on which we continue our journey.

Oh, by the way, there is another backpacker on the bus. A guy from England. He also doesn’t know where he stays tonight. I invited him to hostel hunted with us if he’d like.