You never know where your travels will take you — or what you’ll learn on the way. I still think it’s odd that as part of traveling the world, I landed up living in Austin for a few months. Yep, Austin – Texas – USA. Not some remote place like Austin like when I was in Australia and got to waterski under the Brooklyn Bridge. 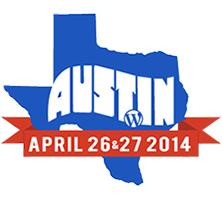 As it happened, WordCamp Austin 2014 is taking place during my stay.

And since I started getting into WordPress heavily as I traveled — due both to starting this blog and being robbed of my Mac and thus, my license to use Dreamweaver and Photoshop — I was thrilled by the timing!

So my very first WordPress volunteering is here in Austin.

I manned the camera and helped the speakers in the Themes & Design track all day today, and return for more tomorrow. The stuff in the track was all of interest to me, but was either stuff I knew 10 or more years ago, or is a bit over my level. But either way, it’s of interest and there was something new to learn. But the greatest part of WordCamp Austin was (and will again be tomorrow) the hanging-out time. I walked into the Help Room during lunch to help folks, and learned so much for myself.

My head is swimming with new information. I’ve started with some things. More will work their way around in my brain as I try to sleep, despite my utter exhaustion. Some will be more fully worked out tomorrow. And there’s a whole lot more to learn Day 2 of WordCamp Austin.

How does all this matter?