Skip to content
Home » All of Deb’s tales of travel and tech » Packing » Excellent luggage locks hold up well! Safe Skies Locks – but I cannot recommend it 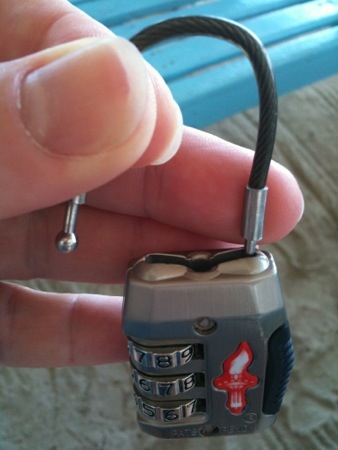 February 14, 2013 (updated Oct 1, 2015, with a note of lock failure July 2015) Seeing this lock fail, I cannot recommend it any longer. After trying to communicate with the company to share the failure, I learned first-hand that the man behind this company doesn’t care. This is a company I would never deal with again, never recommend, and I warn you away from.

Further update February 2018: Commenting to some industry experts about this lock and company, not just once, but several times to several people, I have recently learned over and over that this man is not the many who actually created the TSA lock system although his PR company positioned him as such. The entire luggage industry knows the actual TSA lock system developer and now I do as well. Unfortunately, I’d learned of this lock as a tech writer/specialist, not as a travel writer/person. This lock was good, as I report here, but I have learned first-hand and heard too many stories by other 3rd parties that this is not a company to support or recommend in any way.

In April  2012 I posted here saying:
“One item I was glad to discover before travelling was the Safe Skies Lock. … I love that the lock is a flexible cable and that it loops through my backpack/bag’s zipper well.”

At the time, I had been using my lock for about two months and loved it. Now I have been using this lock for over a year so it is time to report in on how well it has held up.

As I mentioned last April, I not only use my Safe Skies Lock to lock my bag (which is a convertible suitcase/backpack) — but also remove it from use on my bag to use it on lockers.

With the exception of a three-month stay in a home-like hostel in San Salvador that had a drawer with its own lock and two stays in the homes of people who became friends, I have opened and closed this lock quite a few times per day.

This is my 12th month traveling in Central America. That is, 12 months of every day needs to get clothing, a camera, a cable, money, etc.,

Plus, you know those people that leave their homes for the day, then realize they forgot something and go back inside to get it? I am one of those people. And while traveling, forgetting something means returning to my backpack-bag or to my locker — which means unlocking and locking this lock again.

My Safe Skies lock shows no wear and tear. It shows no sign of jamming or slipping or getting stuck or worn put in any way.

I fully expect to take this lock with me on my next trip, and my next after that.

But meanwhile, I am not finished using it on this trip.

Another brand lock that failed
During my travels, I met a man that had purchased REI’s TSA lock. He selected their lock because it had two cables, enabling them to lock both the top and bottom of their backpack with one lock.

This man is not stupid. He is a competent professional. He set his combination and practiced opening and closing his new REI lock before locking his bag. His wife had also done so. Two people knew this combination.

I met this man and his wife two days into his trip — and for two days he had been unable to get into his bag. His lock simply would not open! His only access to his clothing and belongings was the few inches he could push the zippers. Fortunately, he had the access to his wife’s stuff. But while that works for a toothbrush, it doesn’t work for underwear. He was not a happy camper.

We brainstormed.TSA officials would have a key to open it. However, he was in El Salvador, nota TSA country. No keys there.

We used my iPhone and Vonage Mobile app to call REI. An hour later he had their final advice: cut the lock and they would replace it upon his return. So all he had to do was find a cable cutter and he would have clean clothing. And then he would need to find and purchase another lock to protect him for the entire duration of his travels. 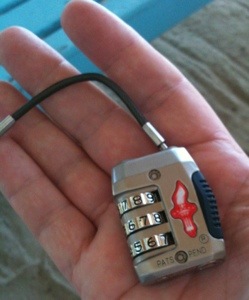 Nothing will change that I loved this cable lock — but I must report that this lock has failed, and I have a serious use warning for you now.

The combo numbers still slide fabulously. The lock still looks brand new, even after using this lock daily for about 1 year and 5 months and even more when you add intermittent low use, for about 9 months after that heavy use.

However, months ago, while sliding the lock open the lock failed and it is no longer usable.

Out of respect to those who are currently relying on this lock, I will not report the failure. But if your cable gets cramped or compromised in any way, get a new lock. I didn’t count how many more times I was able to use this lock, but I do know that I wish I’d bought a new lock immediately.

Sadly, the company’s Customer Service person was angry with me for wanting to send them photos of the failure. As a tech person, I consider this an important thing to do. I asked about that sending the photos that I painstakingly took, was a generous, good idea. Customer Service man was simply bothered by the idea of this. So while I like the lock, I definitely do not like the company.

Update 2017: I approached the actual owner of the company in person at a trade show in 2017 and again tried to tell him of the failure. I was brushed off. These people seriously do not care about their product.