When you’re traveling with a smartphone or tablet and perhaps a real camera (as I prefer) having a spare charger for these USB-charging devices is a huge help! For each of my year-plus trips since 2011, I have always carried an extra rechargeable battery charger, aka “power bank.” (First by Scosche and then by Innergie.) Recently I received a new power bank and  I was excited to be adding it to my life for my next trip.

Update: less than 2 months later in November. The scale stopped working a week into my travels. It started to say -.02 lbs and never worked again. I patiently awaited word from the company as to whether there is a secret reset that I can do. There is no. It’s a “firmware issue” I was told. And when I asked if I could update the firmware my question was acknowledges but no answer came. So, if you buy one, how will you know that it will work? There is no ID, no marking on it to announce the firmware version. I was told they’d send me a new one. How does that help when I am half-way around the world? It simply does not.

I first kept this post here in the hopes that my scale’s failure is not the norm. I hoped I had a pre-release model that was never on store shelves. I have not been told this is the case.
So now I keep this post here to advise you that, as promising as it looks, I have to advise you to STAY AWAY FROM THIS PRODUCT. It’s not worth the risk of failure.

I very much regret not bringing my Innergie on this trip and will soon rectify this.

What does your backpack or suitcase weigh? 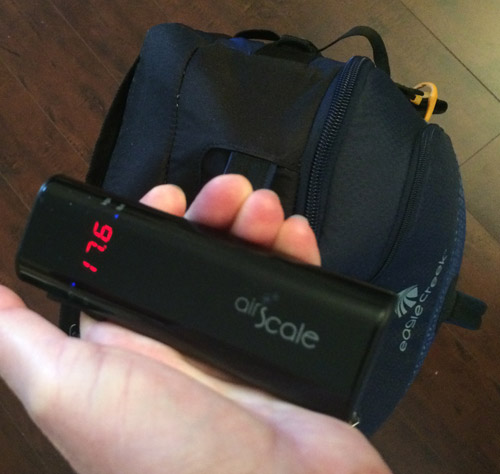 When you live out of a backpack there’s a pride in being able to carry everything you need on your back. If you have too much weight or stuff you just give things away and you go on with your travels. You’ll cool. You can handle it (even if it’s too heavy and you’re quietly struggling).

But airlines are another story. They’re not cool with that extra weight. Or rather, they are — but your wallet won’t be. If your travels include flying, knowing what your backpack — or wheelie bag — matters.

Once, as I packed, I brought my backpack into a shipping store and the clerk there kindly weighed it for me. At Nomades hostel in San Jose, Costa Rica, the friendly owners hung a luggage scale as a courtesy for its guests.

I have been tempted to add a luggage scale to my travel belongings — but that’s another weight and space-taker. Carrying everything I need for an over-one-year-long trip is already hard enough.

So this intrigued me….
The AirScale is luggage scale, but also a power bank! 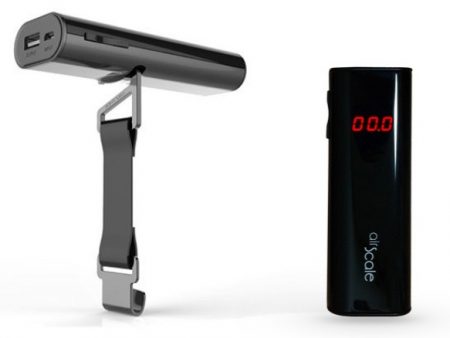 Like all the other power banks I have owned, traveled with, and tried, it has a micro USB input to change it and the familiar standard rectangular USB output so you can plug in your regular device charging cable to charge your USB device. It’s  6500mAh battery which is a great amount of power to speedily recharge your phone and even tablet.

I have been able to charge an iPhone 3GS, 4S, or 5S almost 3 full times with a 6000mAh battery. I have even used a similar size power bank to add charge to my now-defunct Panasonic Lumix camera. 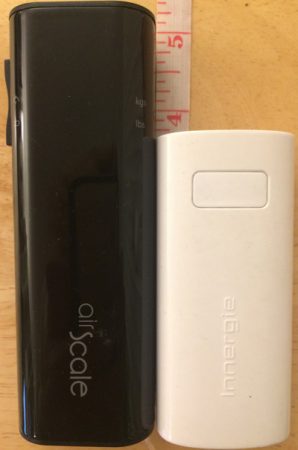 My fantastic Innergie battery beside the Airscale.)

At  5″ long, it’s the same length as the Scosche goBAT II power bank battery I carried with me daily for a year in Central America. (The goBAT II was the size or my iPhone 3GS.) It’s 1.5″ longer than my beloved  Innergie PocketCell Plus battery, which became my day-to-day battery Sept 2014, remained in use until January 2016 and will come on my next trip mid-2017 if it can handle more years of use. However, the AirScale is just 3 ounces heavier than that Innergie battery and holds a bit more power — which makes me fond of the AirScale yet again.

But underneath is the magic feature. You simply slide in the detachable luggage strap and you have a luggage scale! Your battery pack is suddenly an easy to hold luggage scale with a clear digital number ready to announce the weight of the luggage you hang from the hook — in pounds or kilos!

Now, about the price…

This impressed me too. The retail price for the AirScale is $59. That’s even less money than some battery packs cost, — and they don’t include a luggage scale. It’s also the same price or better than many of the luggage scales I’ve seen in stores!

Airscale is from a company called Oaxis and they have several other creative solutions for tech and travel as well.

I will continue to update you as I use it.

And of course, you see my update at the top where I hope you won’t miss it. This is not a product I will travel with again, even if they’ve sent me a replacement. It’s not one I dare to recommend to you.