I write this from my home-base of Los Angeles, CA as I take a travel break and my travel is house/tech-sitting within various areas in LA. Sprint recently launched it’s LTE (Long Term Evolution aka 4G) network in Los Angeles, California, so I took a Samsung Galaxy Note II for a test run on a bus across town to see how it does. The bus was a local, but there was no traffic at this time of day, so we moved rather swiftly. The Note II is a rather large screen and has a split screen feature so you can view and use two apps at the same time. I placed the Maps app on the top and, well, Facebook, as the bottom app. Maps loaded immediately. I figured out how to set it to track my movement. (It’s not highly intuitive.) I did that first by Destination, later just […] 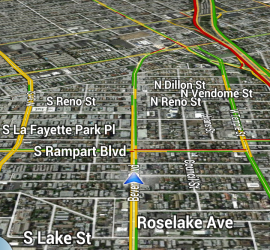